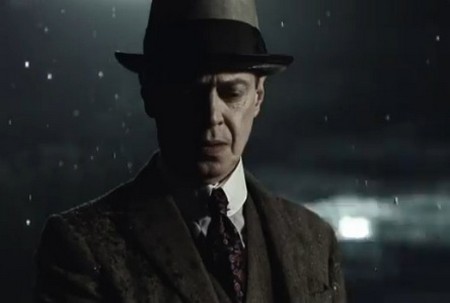 Boardwalk Empire is a critically acclaimed HBO television show with more chutzpah than a wet gun. The season three promo is here and Celeb Dirty Laundry is bringing you all the goss.

The show has been the go-to word for any television fanatic, especially after the pilot episode was directed by none other than famed director Martin Scorsese. The pilot episode cost HBO $18 million and has since been an unparalleled feat.

The currently released promo video is wrought with symbolism and over-the-top noir elements, as is popular in the television show. Season 2 ended with Enoch Lewis “Nucky” Johnson (Steve Buscemi) brutally shooting and killing his former partner, Jimmy (Michael Pitt). Nucky, having proposed to Margaret (Kelly McDonald), sports a wedding ring that slips off his finger in awesome slow motion, signaling a marital problem – which isn’t surprising after Margaret donated all of his land to the church. The plot will jump forward about 16 months in the third season of the show.

According to writer Terence Winter, the plot will pick up on 1922’s New Year’s Eve and the new season will bring an abundance of problems for Nucky. He will be dealing with new problems and intricate factors, including the rise of mobsters such as Al Capone.

Oh gosh, we are salivating from excitement!

It seems that things will never be the same again for Nucky, as the tagline at the end of the promo reads, “You can’t be half a gangster” – referring to the days of keeping his hands clean from the dirty crimes are over. The blood has been spilled and someone will have to pay.

The 3rd season premieres on HBO on Sunday, September 16th, so set your DVR’s and make sure to lock the kids in the closets. You can’t miss this one.