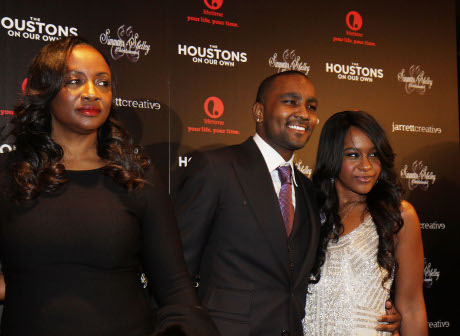 Bobbi Kristina Brown‘s alcohol addictions are spiraling out of control, claims her family, and they say if she doesn’t get treatment soon that she just might drink herself to death. Ever since she finished taping her docuseries, the controversial new reality show titled The Houstons: On Our Own, her family has come out of the woodwork saying that the problem is serious, and it’s starting to bring back memories of Whitney Houston’s unfortunate struggles with addiction.

As TMZ reports, Bobbi is associating herself with the wrong crowd, which includes several individuals who noticed Whitney’s problems back in the day but didn’t intervene. They were enablers. “Many people close to B.K. feel she has allowed some of Whitney’s enablers to get heavily involved in her life … and if Bobbi doesn’t cut them out soon, she’s doomed to the same fate as her mom. Those people — sources say — include various individuals who knew about Whitney’s problems, but didn’t take action when the singer’s life was spiraling out of control.

Bobbi’s problems were highlighted during the premiere episode of her Lifetime series, “The Houstons: On Our Own” … which featured 19-year-old Bobbi slamming wine and slurring. The episode was taped a few months ago … and our sources say the boozing has only gotten worse since the show wrapped.”

Pat Houston is one person whom people are suggesting is a negative influence on the young celeb. Pat Houston is encouraging Bobbi to visit the same counselor in California who treated Whitney, but family members aren’t supporting that decision, as they claim that Whitney’s counselor did nothing for her. And if he couldn’t help Whitney, how is he going to help Bobbi? The family is sincerely concerned for Bobbi’s health, and we hope she figures out a gameplan. Soon. Before the clock runs out.

What do you think about Bobbi’s situation? Do you think she should be featured on a reality show when she clearly has other priorities, like getting her life back on a healthy track? Let us know!