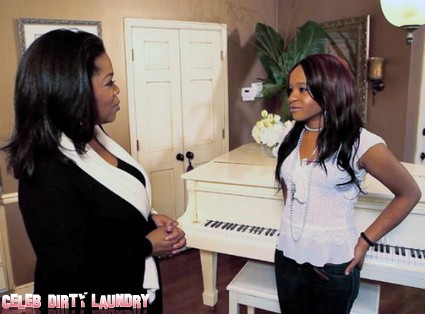 Whitney Houston‘s teenage daughter has revealed her future plans – she wants to be a singer just like her Mom. Bobbi Kristina Brown told Oprah Winfrey in last night’s exclusive chat on OWN about her hopes and dreams. Following in her Mother’s footsteps is top of the list.

It’s the first time Bobbi Kristina has spoken publicly since the Diva’s sudden death a month ago. She feels a responsibility to ‘carry on the legacy‘ created by the troubled star. The 19 year old might also try ‘some acting and some dancing‘ as well. She knows the comparisons will come but says Whitney offered plenty of advice and words of encouragement ‘it’s a lot of pressure, but she prepared me for it‘. All I can say is good luck! I hope you inherited your Mom’s voice.

So how is the teen coping with losing her ‘best friend‘ only last month? At the time Bobbi was admitted to hospital twice after suffering a breakdown. ‘I’m doing as good as I possibly can at this point. I’m just trying to keep going. I can hear her voice telling me to keep moving. ‘Baby, I gotcha’. She’s always with me. I can always feel her with me. No-one knows what an amazing spirit she was. She wasn’t only a mother, she was a best friend. She was a sister, a comforter. Of course, we had our arguments, we had everything, but at the end of the day, that was still my mother, my confidante, my everything‘.

And Whitney is keeping her daughter company from beyond the grave ‘Lights turn on and off, and I’m like, ‘Mom, what are you doing?’ I can still laugh with her and still talk to her’

Bobbi is well aware of her Mother’s addiction to drugs but wants people to know she was more than a tabloid headline….that she was a positive person trying to do the best she could ‘Everything people are saying about her – all that negativity – it’s garbage‘.

The teenager may be full of praise for late Mother but she’s not such a fan of her Dad Bobby Brown. She wants to lose his surname and become a Houston Bobbi Kristina Brown Wants To Ditch Her Daddy’s Name