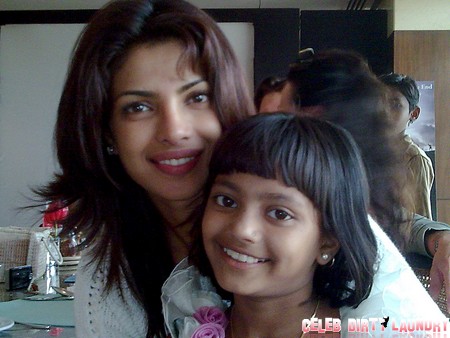 Even Bollywood likes to speculate on their favorite actors romantic lives. Shahrukh Khan and Priyanka Chopra are two Indian mega-watt celebs that have been subjected to many rumors about their status as a couple. They are also smarty pants business people and they realize that mentioning one another whenever possible in an interview will fuel the rumor mill and keep their stars shining brightly.

Priyanka (think a Bollywood version of J Lo who can read and write) is set to drop her debut album and so of course, Khan had to comment on his maybe lady love. According to Gather, Khan is Priyanka’s biggest fan,

“Priyanka has the capacity and talent to become the first crossover star from India, our first creative export. She has a super team backing her and she is truly an international brand and will make India very proud.”

Kahn and Chopra kind of remind me of a certain American couple that dated for years, but didn’t really confirm it. They left the fans guessing about their status for eons until she turned into a total “trampire” and busted up a family, not to mention her relationship, in the most public of ways.

Do you think Khan and Chopra are indeed together or just working the media for a little bit of extra press? One thing’s for sure, if they are together a public bust up Kristen Stewart and Robert Pattinson style could be punishable by law in India. Well, almost. Their celebrities are held to a much stricter code of morals, that’s for sure!  Are you a Bollywood fan? Would you like to see more coverage here on Celeb Dirty Laundry? Tell us in the comments below!