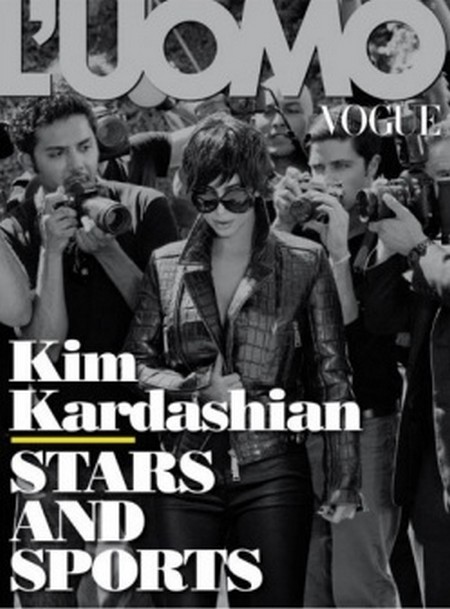 Kim Kardashian talked to L’Uomo Vogue and explained to them that even though she was born wealthy with many privileges she deserves her success. Kimmie feels she has built her own career and being born wealthy did not help her one little bit.  Kim is totally disillusion, if she was not wealthy and did not rub shoulders with celebrities no one would care about her.  Does she really believe anything she says?

“Despite the affluence, at only 31 I’ve been able to build my own empire in the world of entertainment and, although looks and friendships are important, I want the new generation to understand that if you don’t believe in yourself and in your own ideas, you go nowhere.”

Kim went on to talk about her 72 second marriage to Kris Humphries, apparently she learned a lot from the experience.  She claims her relationship with Kanye West is going to be a more private matter. Of course it is, that is why Kanye is going to be on her reality show Keeping up With The Kardashians.

She said: “In the past I suffered a lot because of my honesty, and when it didn’t work I was criticized and treated badly: I can only say that now, with him, I’m happy.”

Honesty, I doubt Kim knows the meaning of honest. She released her own sex tape and got paid mega dollars and then denied it.  The sex tape is her claim to fame!  Furthermore it is pretty clear she married Kris Humphries to help the rating on her reality show. Kim is a famewhore and she will do just about anything for money.  Honestly just does not factor into it for Kim!

Do you think Kim would be successful if she was not born rich? Hit the comments and let us know your thoughts!