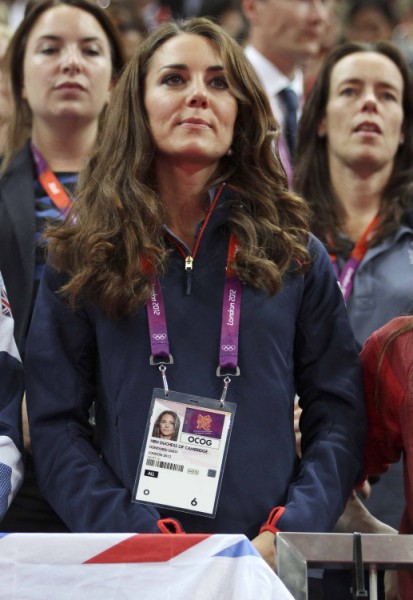 Kate Middleton can’t stop freaking out over the photo scandal in Provence. I used to call it the booby scandal but I can’t do that now since she flashed her kooter too. But you can’t call it the nude scandal since her boobs were covered when she showed her vadge. This is very technical stuff so I’ll just call it the scandal since she’s only had one and a source told OK! magazine she vowed to Prince William it would be her last.

“She won’t stop beating herself up,” a palace insider told OK! magazine. “Will has told her it’s not her fault. She thinks she can never let her guard down again. She has vowed this will be her last scandal. Kate is mortified. Since she and William met, she’s constantly been on guard against embarrassment. When they used to go away with William’s friends, Kate would lecture everyone on what not to do in case there were photographers.”

I once heard a story that when Kate and William used to hang out at nightclubs in London before they were married she would always go to the bathroom before William wanted to go. She would fix her make-up, get her hair right and make sure her clothes were perfect so she didn’t look like a drunk mess exiting the club. Princesses in waiting do not look like drunk messes when they don’t have the ring yet. I bring this up to point out that Kate has been waiting for this chance for a long time. She’s thought long and hard about her image. She doesn’t get caught up in alcohol. She doesn’t lose herself in the music. Her eye has always been on the prize and it’s ironic the second she got it, she got caught in a horrific scandal where the whole world now knows if she waxes or not.

Everyone wants to know how she’ll react. She did beautifully on tour but that was before she was caught with her pants down. She’s had to have had pathetic moments on the phone with her mom and Pippa rethinking everything, right? Kate’s made of sturdy oak but this scandal would shake up the most steady of people. She’s had to have wondered if all this scrutiny and invasion of privacy was worth it.

And the timing of this sucks even more because Kate was just catching her stride. She was perfect at the Olympics because everyone got to see her relax, put her hair up in a ponytail and have fun. Those days are over for awhile. If this report from OK! is true, then Kate is going to take her role even more serious than she did before, and that’s saying a lot. The stress can’t be good for baby making and that’s precisely what she needs to put this scandal behind her. I’ve said it before but Kate is wound tight. Missteps are a major problem for her and she made a huge one. Would she think of stepping away from it all? Of course. But she’d never take it seriously! This is the girl who silently suffered while the world called her “Waity Katie” for ten years! She’d never give those snotty aristocrats who ripped on her behind her back the satisfaction in thinking she couldn’t handle the pressure. Kate, and more importantly, Carole Middleton would never let that happen. Get ready for Kate 2.0. She’s going to dazzle. She’s going to stop hearts. She’s going to show the world why she deserves to be queen all while wearing the most sensible, boring shoes.

How do you think Kate will react the next time she has a public appearance? If she was pregnant, do you think the royal couple would announce it early rather than wait the customary first trimester?