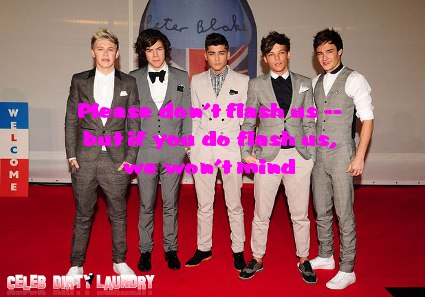 Boy band sensation One Direction says that they definitely aren’t going to hate on their overly enthusiastic female fans who, perhaps due to a brief gusts of wind, frequently tend to lose their tops. The ‘What Makes You Beautiful’ singers have been receiving endless attention during their visit to the states and, of course, they’ve been loving every minute of it. Who doesn’t like a nice, warm spotlight?

On the issue of flashing, which seems to have become a pandemic of sorts, Niall Horan said: ”We’ve had a few flashers — but we’re not encouraging it, or deterring it! The craziest thing was supporting US boyband Big Time Rush,” he continued, “All the fans were wearing our T-shirts and holding One Direction banners, too.”

The band also includes Zayn Malik, Liam Payne, Harry Styles, and Louis Tomlinson, all of who were excited to learn that their debut album Up All Night topped US charts. Niall told Contact Music that he frightened his cab driver when he received the news from his manager.

”We had a few days off, so we [bandmates] weren’t in the same place at the same time. I was in the back of a cab on my way to buy me and Liam tickets for a New York Knicks basketball game, and my manager called me up and said, ‘It’s close, we’ve got the numbers…’ and was holding it back, a bit like a Simon Cowell moment. Then he said, ‘But you’ve got Number One,’ and I was just screaming down the phone and frightened the life out of the cab driver! I had to explain the situation, because he looked at me like, ‘Get out of my cab!’ But I was shocked and shaking.”

Do you all approve of One Direction? As they continue to gain more and more popularity, are they an imminent threat to The Beebz? Send us your predictions!