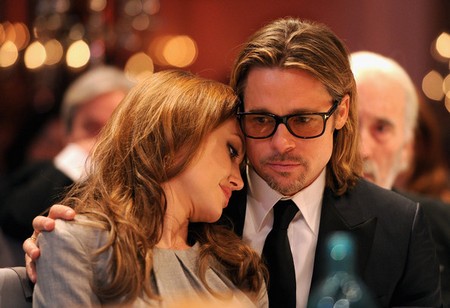 Brad Pitt and Angelina Jolie are moving full speed ahead with their upcoming wedding as the couple prepares to host an engagement party at the end of the summer while they’re settled in London. Now magazine reports the party will cost the pair over $100,000 and will include up to 250 friends, including British chef, Jamie Oliver.

Brad and Angie and all the kids will be in London over the next 15 months thanks to back-to-back filming schedules and have recently settled on a “palatial” mansion 21 miles outside of London to call home.

This smells fishy to me. There are stories going around the couple is planning to get hitched this fall at their French estate, but could an engagement party be just the right cover for the couple to say “I do” in front of family and friends without the annoying lenses of the paparazzi spoiling the event? Other big names have done it. Sandra Bullock invited people to a barbecue and instead got married to Jesse James…maybe not the best idea. And Julia Roberts surprised guests by inviting them to her wedding under the guise of a Fourth of July soirée. Not one paparazzi pic was taken at either.

Where ever it turns out to be, it will surely involve the biggest names of the celebrity world. Who else do you think they’ll invite? Jamie Oliver is tight with Gwyneth Paltrow and she cuts her time in London nowadays while Moses and Apple learn Sanskrit or whatever those wunderkids study. But I doubt she’ll get the invite since I’m sure Angelina won’t want any of Brad’s past fiancés there. But I wonder if that applies for her as well. She married English actor, Johnny Lee Miller, in 1996 and divorced three years after. I bet he’s on the invite list. They’re still pretty tight. What about good ‘ole Billy Bob? There could be an invite there as well. Angelina just wrote the forward in his new autobiography, “The Billy Bob Tapes: A Cave Full of Ghosts.” No, I’m serious, that’s the real title. She praises her husband of three years saying he has a, “big beautiful heart.”