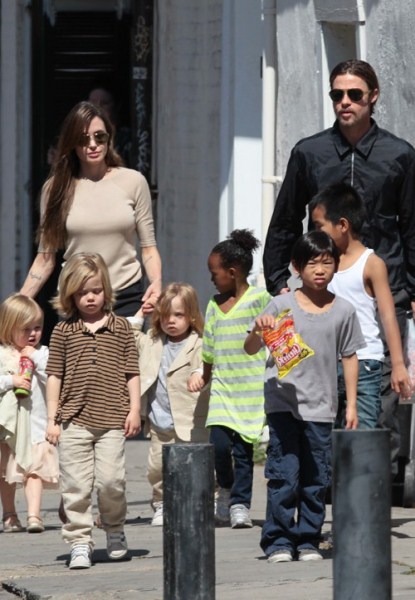 Leave it to Angelina Jolie and Brad Pitt to celebrate their engagement in an unusual place.  Most couples save the big trip for their honeymoon, but not these two.  Jolie and Pitt have reportedly run off to the Galapagos Islands to enjoy their new status.

The couple along with all six of their children, Maddox, 10, Pax, 9, Zahara, 7, Shiloh, 5, and three-year old twins Knox and Vivienne, arrived in Balta, Ecuador before taking a luxury yacht to the islands.  While there they are reportedly staying at the exclusive Royal Palm Hotel.

A source confirms to People Magazine: ”We were informed that they arrived at the airport in Baltra yesterday. Then they made their way over to a villa in the Galapagos Islands.”

It is rumored that Pitt finally asked Jolie to be his wife last Christmas, after spending many months designing the perfect ring for his girlfriend of seven years.  It has been reported that as the children have started to grow up they’ve questioned why their parents aren’t married already.  Surely, pressure from the little ones contributed to Pitt’s decision to take a step towards making things official.

After being presented with her ring, Jolie supposedly showed it to each child individually.  It makes sense that the entire family would be off celebrating this happy occasion together!

Will Brad and Angie ever really make it down the aisle?  Tell us what you think of their engagement in the comments below!