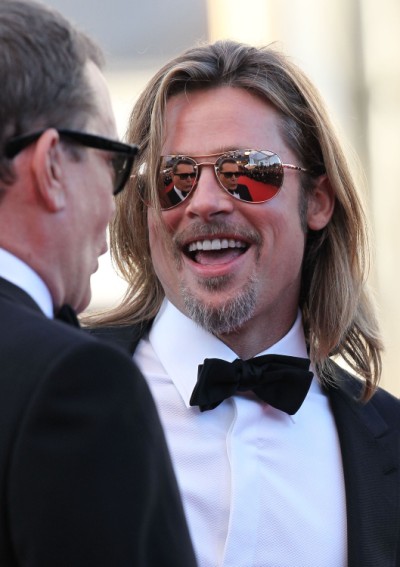 With a constant drink in his hand, Brad Pitt is clearly enjoying himself as he promotes his new movie, Killing Them Softly, at the Cannes Film Festival. The actor walked the red carpet yesterday with his greatest accessory, fiance Angelina Jolie, noticeably missing. But that’s not stopping the father of six from letting loose and celebrating his last few days of singledom.

Us Weekly reports Brad and friends relaxed and let the alcohol flow at the film’s after party which turned into a sort of makeshift pre-bachelor party. The black-tie affair included Brad’s costar Ray Liotta, Chris Tucker and even, P. Diddy. It couldn’t be the real bachelor party without George Clooney!

“With Brad’s impending wedding it almost had the feel of a sophisticated pre-bachelor party, with bottles of $390 Johnnie Walker whisky and plenty of cigars,” a witness told Us Weekly. “It was definitely a night for Brad to remember.”

I’m not too sure how Angelina would take this, are you? I’m almost positive it will generate another, “Angelina’s calling the wedding off” tabloid headline. She doesn’t seem like the type to happily sit home with the kids while Brad drinks the night away in France.

Media outlets have run ragged over the past two months trying to guess when Brad and Angie will say I do. We’ve heard reports it would happen this summer at their compound in France. But Brad recently dismissed all the speculation. “We actually, really and truly, have no date,” he said during a press conference for his new film on Tuesday. “It’s just something that makes sense to us, and certainly date-wise, it’s just a rumor. We’re still hoping that we can figure out marriage equality in the states before that date.”