Brad Pitt Hotter Than Ever In W Magazine (Photo) 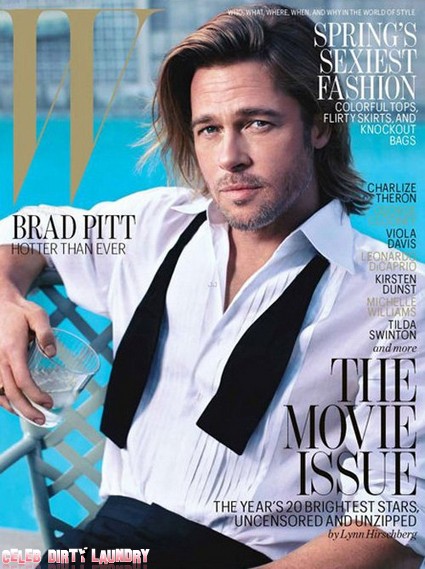 Brad Pitt is the man of the moment. He’s up for a Golden Globe tomorrow and could get an Oscar nomination later this month. He’s also landed one of W Magazine’s two February covers.  The father of six is smouldering on the front – in a look not dissimilar to Interview With A Vampire almost two decades ago.

The actor is rocking Tom Ford and Burberry in the pictures taken by celebrated photographer Mario Sorrenti. His hair is not looking as unkempt as it has in recent times. He really is one hot looking 48 year old….and Angelina Jolie is one lucky lady! Inside the star of Moneyball opens up about his first Hollywood audition, favorite movies and dying on the big screen.

So which roles did he read for when he was starting out …‘My agent sent me out for two films: One of them was The Accused with Jodie Foster. I was so excited.‘

Which movies have made him shed a tear… ‘I watched a film called Life as a House. Kevin Kline is an architect and learns he has terminal cancer. He’s estranged from his teenage son and decides they’re going to finish this house’.

And how does it feel to take your last breath in front of the camera? ‘I die ­really well, by the way. It’s one of my strong points. I just take a bullet well.’ If he says so!