Brad Pitt Walks With A Cane On The Red Carpet 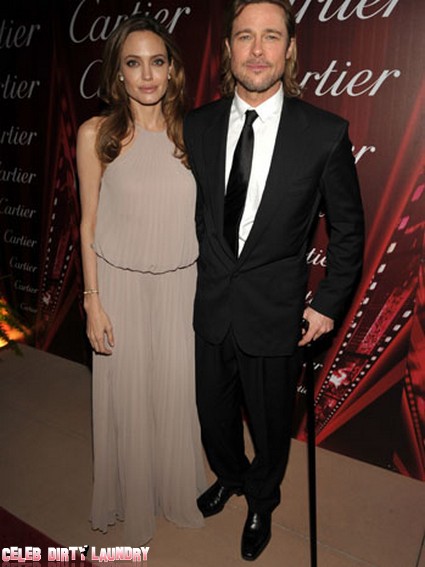 Being a parent can be dangerous work. Just ask Brad Pitt. He walked the red carpet at the 23rd annual Palm Springs International Film Festival last night with a cane! Not the best look for an actor who was once voted the sexiest man alive.

So is the cane a new accessory? Brad explained ‘I was carrying my daughter and I tripped and fell. But everyone’s fine.’ He reportedly twisted his knee and tore some ligaments while on the ski slopes with three year old daughter Vivienne Jolie-Pitt last week. He’s been seen out and about with the cane in Los Angeles over the last couple of days.

It was a special night for the superstar couple. The 47 year old actor was being honored at the Festival Gala for his work in Moneyball and Tree of Life.

Angelina Jolie helped him along the carpet and told reporters parenthood isn’t all smooth sailing and you just have to roll with the punches ‘Everyone’s fine. I think all parents get injured in the line of fire! When Maddox was young, I fell and hurt my elbow. It’s a pretty common occurrence‘. Angelina looked her usual gorgeous self beside her long term partner in crime. She was wearing a silk chiffon gown from designer Elie Saab.

But children weren’t far from their minds last night. It’s a special weekend for the family of eight. Today Zahara Jolie-Pitt – their eldest daughter – is turning seven. She was adopted from an orphanage in Addis Ababa in July, 2005. Happy Birthday Zahara!