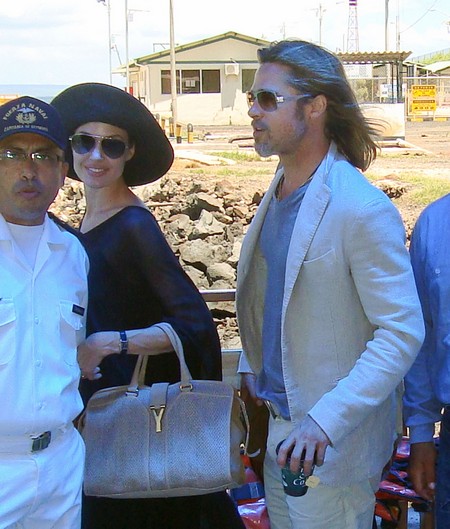 We always figured Angelina Jolie was an anorexic nut whose self-imposed dietary regimen led to her stick-thin figure. Well now we have learned that in fact it is Brad Pitt’s skinny-girl fetish that forces Angelina to starve.

It seems that a list of Brad’s women and their relative weights both in and out of their relationships with him makes the point. Both Juliette Lewis and Gwyneth Paltrow maintained skeletal figures while they dated Brad. Even Jennifer Aniston dropped to 109 pounds while she was married to him – now Jen is a healthier looking 120.

The Enquirer Print Edition of May 21 reports:

Angelina Jolie has scared fans with her gaunt, skeletal figure – and it appears Brad Pitt is the architect of her frightening weight loss. Brad prefers his ladies to be rail-thin, and he lets them know it, say insiders.

“Brad doesn’t come out and demand his women be skinny, but in a not-so-subtle manner, he drops hints,” revealed a close source. “If he’s constantly comparing his current girlfriend with his exes, it has to start making them feel self-conscious about their bodies.”

Brad likes his woman super-thin for their red carpet appearances, says the close source. When Angelina first met Brad on the set of “Mr. and Mrs. Smith” in 2004, she weighed 115 pounds, which seemed a healthy weight for her 5-foot-7 frame. “But now she’s wasting away at less than 100 pounds!” declared an insider.

Brad is also said to have hinted that Jennifer Aniston needed to drop a few pounds when they first started dating.

“He used to talk to her about how thin and fashionable his former girlfriends Juliette Lewis and Gwyneth Paltrow were,” said the close source. “It was a way to motivate her.” So Jen lost the curves she used to show off on ‘Friends’ and she dropped to a waifish 109 pounds. Today, Aniston is dating Justin Theroux and she’s a shapely 120 punds.

And when Brad dated Gwyneth Paltrow for three years in the 1990s, Gwyneth “always felt she was too heavy for him,” revealed the close source. In 1996, she shrunk down to a bony 101 pounds for “Emma.” But today, Gwyneth looks fabulous at 120 pounds.

So here we have an alternative explanation for Angelina’s excessive thinness.  We don’t buy it.  The simpler explanation for the pattern we observe with the woman in Brad’s life is that he is skinny, and few women, especially Hollywood celebs, want to appear chubby.  If you hang with Brad you’ve got to be very thin or else!

Take Kim and Khloe Kardashian – they married giants in order to look smaller – both Lamar Odom and Kris Humphries are huge NBA players.  Can you imagine the plump Kim K with Brad Pitt!!  Of course you can’t – and for many great reasons apart from their respective body-fat percentages… but if the two were photographed side-by-side Kim would look like a small blimp.   And that is something that Kris Jenner would never allow – a sex tape with Ray J was fine – but Kim posing next to Brad… NEVER!!