Brandi Glanville Has A Drunken Wedding In Las Vegas “For Fun” 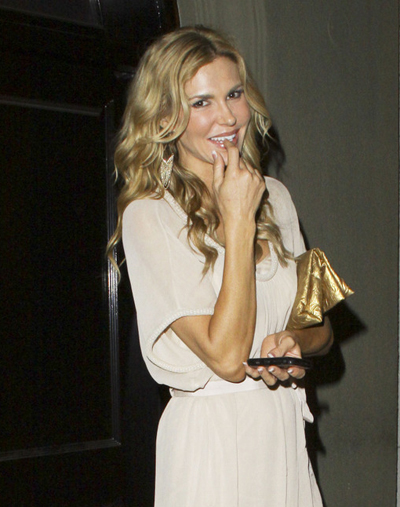 Brandi Glanville, best known for her appearances on Real Housewives of Beverly Hills and for being Eddie Cibrian‘s ex, pulled a Britney Spears over the holiday weekend and “drunkenly” married Mixed Martial Arts manager Darin Harvey in a Las Vegas wedding.

According to US Magazine, the 38-year-old divorcee eloquently Tweeted: “I’m married again- suuuuuuck it! And then had her “honeymoon” at a strip club!

However, Brandi, who became a divorcee when her ex-husband left her for LeAnn Rimes in 2009, later qualified the announcement, adding that it was not a legal wedding and that the two got hitched “just for fun.”

Still, Brandi’s new “husband,” Brian, Tweeted that the couple was going to get an annulment, which wouldn’t be necessary if they didn’t legally tie the knot:

“Everyone chill @BrandiGlanville and I were a bit ffffed in Vegas wanted to do something crazy so we did. Getting annulled still bff’s,” he wrote.

Hmmm…So did the couple get married legally or not? If they had made it official, it would have been good news for Eddie Cibrian, who would no longer be required to pay Brandi child support for their two kids.