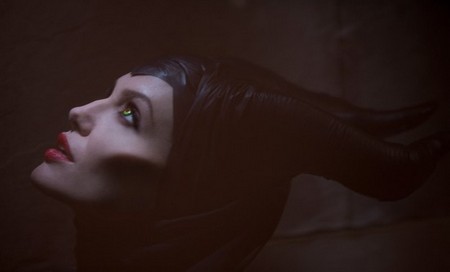 Angelina Jolie is stepping back into her acting shoes, and this role is a scary one! In this newly released picture, Angelina is seen as the evil sorceress Maleficent (the film being the same title) – the one depicted in Disney’s 1959 animated feature Sleeping Beauty.

Elle Fanning plays the one and only Sleeping Beauty, and in this adaption the story focuses on how Maleficent became the cold-hearted woman she is that we all know.

The movie also stars Miranda Richardson, Juno Temple, Imelda Staunton, and Sam Riley.  The filming is said to have started mid-June with all the cast heading residing in London – so does this mean we’ll be seeing Brangelina & Co. sightings?  No doubt her and fiancé Brad Pitt’s children; Maddox, Pax, Zahara, Shiloh, Knox, and Vivienne will be eager to see their famous mom in this new role – let along witnessing her with horns, yellow eyes and blood red lipstick.

So if it’s Angie’s turn at work, then this must mean that it’s Brad’s turn to watch their brood.  The two of them are adamant about not working at the same time, so one parent can be there for the children.  So when will they squeeze in a wedding?  I’m sure they will find time; this couple seems to do it all, no matter where they are.

Maleficent – which will also be in 3D (isn’t everything nowadays?) – is scheduled to hit theaters March 14, 2014.  It’s a long way away, but I’ll still be looking forward to it!