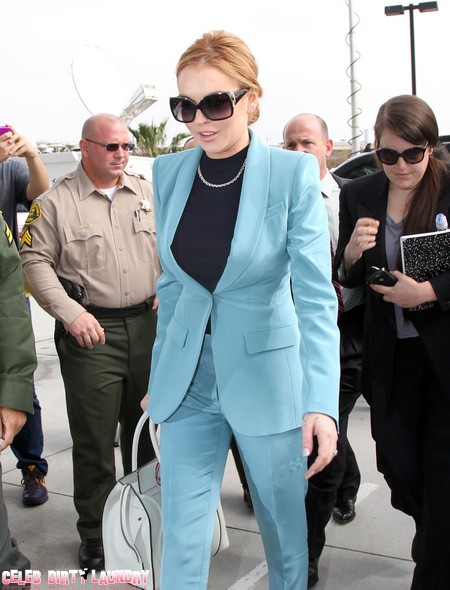 Lindsay Lohan is already in trouble with the law after just completing her probation and being warned by the judge to stay out of nightclubs and focus on her work.  Now a women has filed a report against Lindsay claiming that she got into a fight with the wayward actress presumably at Chateau Marmont.  The women claims that she was talking to a male friend of Lindsay’s when she was set upon by the Playboy Playmate.

It looks like Lindsay will be answering to the West Hollywood Sheriffs’ department as the women claims that Lindsay assaulted her on Thursday night.  Law enforcement sources are investigating the women’s claims and they will determine their validity at which point Lindsay could be called in for questioning or even arrested.

TMZ has the scoop: According to our sources, a woman filed an incident report with the West Hollywood Sheriff’s Department last night. We’re told the woman claims Lindsay got into it with her at a nightclub on Thursday night. She claims Lindsay did not like the fact she was talking to a male friend of LiLo’s.  Law enforcement sources say they will investigate the woman’s claims — like they would any other incident like this — to determine their validity.

Lindsay’s publicist Steve Honig had this to say about the claims. “Lindsay was absolutely not involved in any sort of altercation whatsoever. This is clearly another case of someone looking for money and 15 minutes of fame.”

Can this mean that Lindsay has no intention of straightening out and behaving like an adult?  In the last couple of weeks she allegedly cliped a nightclub manager with her car in a parking lot, had  a secret date with Robert Pattinson and now stands accused of assaulting a female patron while she was out partying.  We wish Lindsay all the best but we fear the worst.  What do you think about Lindsay’s prospects.  Hit the comments and let us know your thoughts!