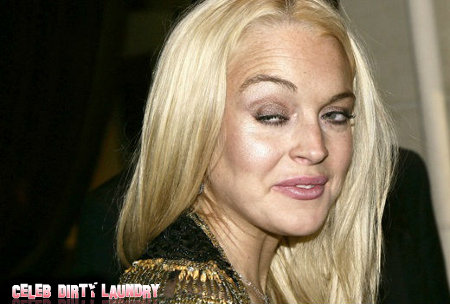 CDL  has just learned that Lindsay Lohan has been rushed to the emergency room after she destroyed her black Porsche by ramming it into the side of a semi truck! Lindsay was apparently driving her Porsche on the Pacific Coast highway where she ran into an 18-wheeler semi truck. Based off of the pictures we’ve seen, the crash is severe, and the car appears to be totaled.

The crash happened around noon today. The entire front bumper was severely damaged (i.e. crunched all to pieces) and the passenger-side window was shattered. As TMZ reports, LiLo was not taken to the hospital via ambulance, but they say an ambulance did arrive on the scene. Based off of this knowledge, we can assume that LiLo has not suffered any life-threatening injuries, but news is still developing.

Doctors are currently performing tests and, while no statements have been released, word on the street is that she’s okay. It’s too early to know yet, but we have to wonder if alcohol was involved and, if so, what this might mean for her future. Lindsay is one of our faves here at CDL, and with a new movie, Liz and Dick, in the works, we hope this was just a mere accident brought about by carelessness.

If any major news develops, CDL will be sure to bring it to you, as we always do. Hopefully LiLo will be all right and that she won’t suffer any consequences from this accident. I send fully supportive ginger thoughts your way, LiLo. Us gingers, no matter how many miles separate us, have to stick together. For pictures of the crash, be sure to check them out over at TMZ.