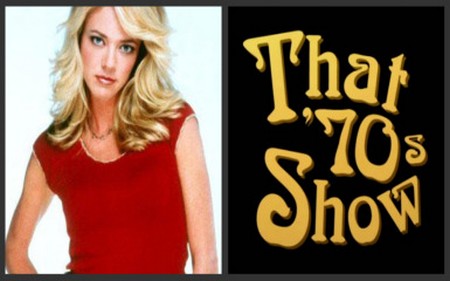 Lisa Robin Kelly of ‘That 70’s Show’ has been arrested on a felony charge of corporal injury upon a spouse.  Lisa was arrested just after midnight Friday – 12:50 Saturday to be exact – by the Los Angeles County Sheriff’s Department and is being held on $50,000 bail.  Lisa played Eric Foreman’s sister Laurie on That 70?s Show and is no stranger to trouble due to her real-life hard partying.

Lisa left the show because of her excessive partying and was arrested for drunk driving in 2010.  She ended up pleading guilty to misdemeanor drunk driving and served one day in jail, paid $143 in court costs, and was put on unsupervised probation for a year.

TMZ Exclusively reports: Lisa Robin Kelly, who played the sister of main character Eric Forman on “That 70s Show,” was arrested early this morning on a felony charge of corporal injury upon a spouse … TMZ has learned.

Kelly was busted at 12:50 AM by the Los Angeles County Sheriff’s Department. She is currently in custody and being held on $50,000 bail.

Kelly is no stranger to run-ins with the law. Back in 2010, she pled guilty to DUI in North Carolina.  We reached out to an agent for Kelly … no word back.

Was Lisa drunk?  Was her spouse? What do you think?