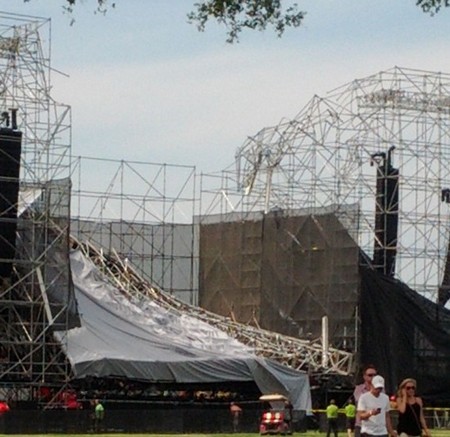 The stage for a Radiohead concert at Downsview Park in Toronto, Canada has collapsed. The Radiohead stage collapse occurred prior to the concert but there were still casualties. So far reports indicate that one person was killed in the collapse and at least three more were injured. The degree of those injuries is not yet known.

Radiohead is a British rock band out of Abingdon, Oxforshire, UK.  Formed in 1985 the band is comprised of Thom Yorke, Jonny Greenwood, Colin Greenwood, Ed O’Brien, and Phil Selway.

TMZ reports: The stage at Downsview Park in Toronto collapsed before Radiohead was set to perform, injuring three and, according to some reports, killing one.

One person was pronounced dead at the scene, reported CP24 and The Toronto Sun, while saying another was still trapped under the stage. Three other people were reportedly injured as well.

The concert was cancelled following the accident. It is unclear what caused the collapse.

The concert has been cancelled and we will keep you updated on the developing story.