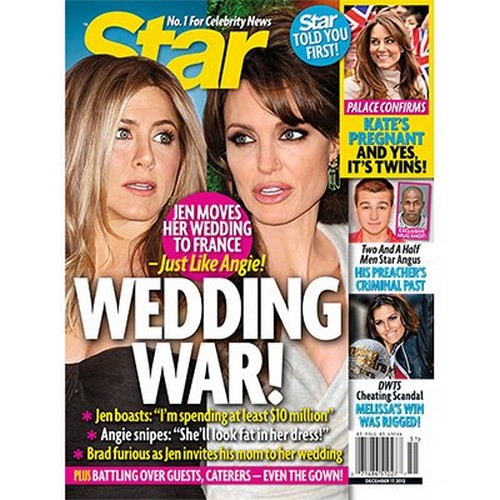 Jennifer Aniston and her most hated rival, Angelina Jolie, have reignited their all-out war. According to a new Star magazine report, Aniston and Jolie’s purported feud is “on the verge of exploding all over again” due to the marriage rumours they have faced for the past couple of months. A source alleges, “Brad [Pitt] admitting that he plans to marry Angelina soon was like a punch in the gut to Jen.” And while Angelina might act like “she’s above her drama-filled past, she still gets great enjoyment over throwing her relationship with Brad in Jennifer’s face.”

It’s like Bridezillas Gone Wild.  According to the magazine, the first move by Jolie – to get married in France – was quickly followed up by Aniston’s plan to also get married in the country de l’amour. “After hearing that Brad and Angelina were planning to tie the knot in France, Jen decided to move hers there too. She told her wedding planner to find the most stunning, upscale wedding venues in Paris. She planning a $10 million wedding and has told the wedding planner she’s willing to make sure they outshine Angelina,” a source explains. The moment Jolie heard about this, “she switched her destination to Cambodia.”

Certain gossip myth busters have already alleged that this story is false, but we’re disagreeing. Jolie and Aniston have a very sordid past together – Jolie stole Aniston’s ex-husband, Brad Pitt, when they filmed that horrid spy-comedy Mr. and Mrs. Smith. While we wish to believe that hell hath no fury on Aniston scorned, we are inclined to believe that Aniston will never, ever let a grudge go.

The war of the Bridezillas will eventually take a more peaceful turn come 2013, but until that time, it’s just too much fun to watch them battle one another publically.

It’s like Gladiator; just less Russell-Crowe-dying-at-the-end, and much, much more bitchiness.