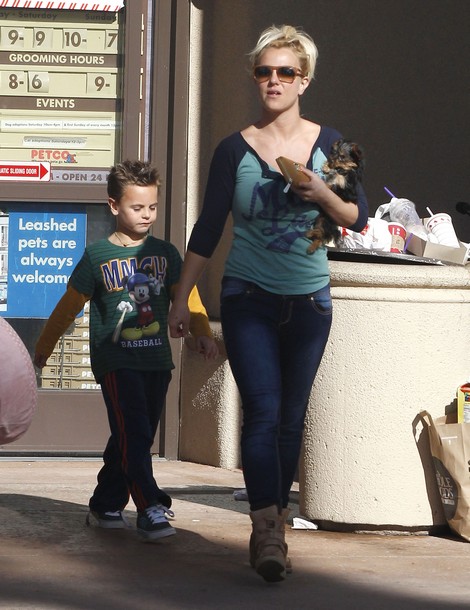 Britney Spears, the loveable mama on X-Factor, has decided to move out of the home she shares with fiancé Jason Trawick, but luckily not permanently. According to In Touch, Brit-Brit took the kid-kid, Sean and Jayden, to stay in a budget hotel at a desolate airstrip like Tina Turner post-Ike. A source alleges, “[Britney has been] stressed about her relationship [with Trawick] and often escapes to hotels [when she needs] a mental vacation.”

Britney’s alleged addiction to roach-infested Norman Bates-like motels is without any validity, but how burdensome would it be to escape from life every second week and book yourself into a room with a stained bed and a stash of 80’s fashion magazines? The source continues, “There’s no romance [between Spears and Trawick]. They often fight and Spears has no friends at work. Britney feels she has no one to turn to. It’s bad.” According to magazine, their alleged wedding has also been since been cancelled, and that Spears is cracking under the pressure of X-Factor.

In Touch, as much as we’d love to believe you, we haven’t seen any signs of an unstable Spears during the past few weeks on X-Factor. In fact, the star has been doing so well mentoring her children that one of her teenagers might even end up winning the show.

Yes, Britney’s had an extremely tough life, but since her heavily publicized breakdown, she has managed to sort out her career and pick up the ruined pieces of her private life.  Although the singer had to endure the pressure of fame, fortune, and celebrity at a very young age, she still came back as a loving, good-natured, and altruistically aligned superstar. We’re going to say it, and don’t hold it against us, but Britney Spears is a friggin’ awesome and resilient young woman; roach-infested motel dweller or not.