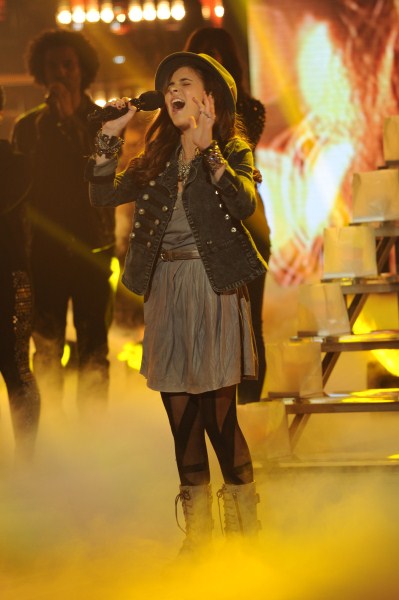 Carly Rose Sonenclar took the stage tonight on THE X FACTOR USA for her Final 4 performance.  Carly Rose Sonenclar sang “Imagine” by John Lennon for the song Carly and Britney chose for her to sing as her second song this week.  Tonight’s show the finale 4 performed live in front of coaches Simon Cowell, Britney Spears, Demi Lovato and AJ Reid for America’s vote and to make it another week.  Did you watch tonight’s performance show?  We did and we recapped it here for you.

Judges comments:  LA said what he loved was she took her artistic ability up by playing the piano.  He thinks she always knows how to find her note.  Demi thinks it was wonderful.  Simon thinks he would have kept her at the piano.  He thinks all her moving around made a beautiful song fussy.  He thought when she hit the big notes she did not have to.  He did not like the arrangement.  Simon disagrees, she thinks it is time for her to move beyond this stage and compete with the biggest stars.

If you want Carly to stick around another week and make it to the finals don’t forget to VOTE. Vote for Carly Rose Sonenclar at 1-855-THE-XF-02