Casey Anthony Sued for 3 Billion Dollars — And Accused of Being Part of the Illuminati! 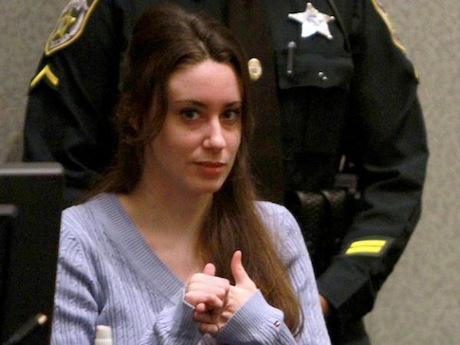 Naomi Riches, a woman from Pennsylvania, is claiming that 26-year-old Casey Anthony made death threats against her, which subsequently caused her severe emotional and mental distress. Don’t get me wrong, I would have liked to see Casey Anthony go down in flames for what happened to her daughter. However, in the eyes of the law, one is presumed innocent until proven guilty. But the law just keeps coming after Anthony and this time it’s with a three BILLION dollar lawsuit!

The lawsuit has numerous claims made by Riches against Anthony, but there is no way in hell she’ll receive that money. Riches is probably just as crazy as Anthony. The court documents prove it: “She told me that there were cameras lodged in the back of my eyes and that my life is a reality show for the Elite. Because of her, I suffer from severe psychological damage. For months I couldn’t use the bathroom to go number 1 or 2 without thinking there was some sick wealthy pervert watching me through cameras Casey Anthony claimed were lodged in the back of my eyes.”

“Casey Anthony is an Illuminati actress who has used the summers 2009-2011 to mock and harass my current circumstances,” the lawsuit claims. “Casey Anthony and Nancy Grace are working in cahoots with one another to fill the media with propaganda so that American Citizens believe there is Justice in this country… Casey Anthony called my house August 2011 and told me that my life was being exploited and that I was a hated nation wife, she told me she would come to my house in Fort Collins, Colorado and kill me just as they did Peggy Hettrick in 1987. She let me know that my left eye would be stabbed out as a part of the Illuminati symbolism. She told me that the government was going to find a way to tap into my water pipes and poison my water supply. I was terrified to shower and drink water for months. I had to spend $600.00 on bottled water.”

Do you think Casey Anthony could have said all these things? Sure, why not. I say things when I get mad, however they aren’t as ludicrous as these and I’m pretty sure I never threatened someone to the extent of them not using the bathroom. Both these women are off their rockers and if Riches thinks this lawsuit is going to go anywhere besides the trash, well, she’s crazier than I thought.