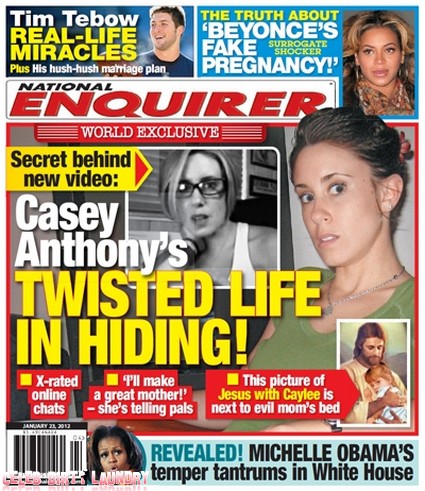 The National Enquirer cover for this week is out and it features some intriguing news. Stories covers range from Casey Anthony‘s twisted secret life in hiding to rumors about Britney Spears planning a surprise Valentine’s Day wedding.

The lead story and no doubt a crusher is ‘CASEY ANTHONY’S Twisted Life In Hiding.’ As we all know murder mom Casey Anthony escaped justice and has since been shopping around interviews and books – but so far with no takers. Now formerly secret video has emerged showing Casey up to all sorts of sordid tricks. Because of the public’s hatred for Casey she remains in hiding -but it looks as though the Enquirer has uncovered her secrets! A woman who would murder her own daughter obviously has other peculiarities that she keeps from public view.

Next we will learn about the goings on in DC – and they apparently involve a very angry first lady: ‘Revealed! MICHELLE OBAMA’S Temper Tantrums In White House’ promises to stir up emotions as America deals with an election year.

Of course the Enquirer wouldn’t miss an opportunity to exploit the NFL playoffs and so we have: ‘TIM TEBOW Real-Life Miracles’ which no doubt will focus on the born again quarterback and his endless PDR – public display of religiosity. I mean really, does God watch the point spread?

The magazine wouldn’t be complete without taking a stab at guessing Britney Spear’s wedding date – since she is formally engaged to Jason Trawick. This whole marriage deal for Britney is crazy – how can a woman under conservatorship get engaged and marry. Perhaps a better question is what sort of BS is the conservatorship anyway as Brit just completed a massive global concert tour? Anyway, for those of you who care you can read about ‘BRITNEY’S Valentine’s Day Surprise.’