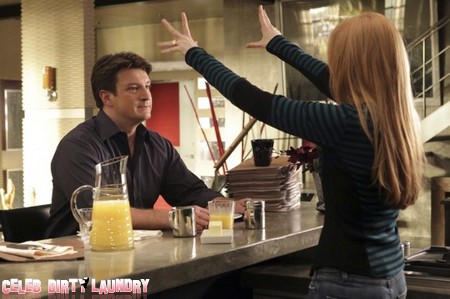 Tonight on ABC a whole new episode of Castle airs.  The episode is called ’47 seconds’ and we will be live blogging the episode with all the up-to-the-minute details.

When last we saw when Odette Morton, a contestant on the hit competition show A Night of Dance, is found murdered in her dressing room, Castle and Beckett must navigate the case’s many twists and twirls without stepping on each other’s toes. But as they delve into Odette’s past, they discover that this reality starlet was harboring a shocking secret that may have led to her death.  If you missed the episode you can read a full recap here!

On tonight’s show when a bomb explodes at a protest rally killing five people, Castle & Beckett realize the key to solving the case is to reconstruct the 47 seconds prior to the explosion. Using video and witness accounts, they uncover the shocking truth about who planted the bomb. Guest staring tonight on the show is Christine Woods and Tim Guinee.

We will be live blogging the show with all the up-to-the-minute details at 10PM EST so make sure to come back to this spot and watch the show with us. Make sure to refresh often to get the most current update!

RECAP: A bomb explodes at a protest rally and five dead, twenty eight injured. People are thinking it is a terrorist attack. Castle and Becket are on the scene and Castle looks shocked. Esposito tells them that everything is rumour at this point, Gates advises that Homeland Security will take over with LAPD helping them out.

Becket talks this guy about Jessee, one of the protesters. Esposito talks to a woman, she was a tourist and just hung around because her and her husband, who was killed, just wanted to see what the protest was about.

The FBI has a photo of 47 seconds before the explosion and that is when the bomb was planted near the lamp post. Gates tells them that they need to find someone who saw the bomb planted, then they will find their bomber.

Becket and Castle are talking to a women that witnessed a Middle Eastern man that was carrying a box just before the bomb went off. Esposito is questioning a homeless guy, he claims to have seen a guy dressed as Beethoven. The Middle Eastern guy cleared, they have interviewed 94 people and they are no where. Gates shows Castle and Becket a letter, there is a new bomb threat. Castle finds that the people that were closest to the bomb were not on the list of people that they interviewed.

Castle and Becket head to the morgue, they want to see if all the victims had something in common, they find that they have blue canvas in common, it was from a blue bag.

Becket finds Alexis upset, he decides to take her home.

Castle replays the bombing video, trying to figure it out. His mom walks in and asks how Alexis is doing, he says fine. She confronts him on his feelings for Becket and tells him that tomorrow is not guaranteed, she goes on to say isn’t better to tell her than to never to tell her. Castle is worried that Becket isn’t ready to hear it.

Castle meets up with Becket and tells her he has been thinking about the victims and how they have no more opportunities, but he is interrupted. Gates has cell phone data of the area around the bombing, it gives them their witnesses. Castle notices something, one person goes to the bomb site area and walks away, it is identified as a phone owned by Andrew Haynes. Becket recognizes his name, he was in the precinct just a few minutes ago.

Castle and Becket find their guy, he is still in the precinct. Both are wondering why he is strolling in there as cool as can be. Becket goes to speak to him and he tells her it is about time they brought him in. She asks him what he saw just before the bombing including where he was. He claims to be a 100 feet away from the bomb site giving out flyers and debating with protesters. She tries to goad him into saying he planted the bomb and he doesn’t bite. She tells him that they know he planted the bomb, they know by the GPS on his phone, also threatening emails that he sent. Haynes asks to speak to his lawyer.

Becket tells Esposito that four people remember someone with a black hoodie, but they can’t narrow it down. Becket wants to question a drummer that is a local street performer. He doesn’t want trouble, his visa expired and he is worried, but Becket tells him not to worry. The drummer tells him that he saw the guy with the black takeover sweatshirt, he dropped a blue backpack near the lamp post, he was in his 20’s and Hispanic. Castle and Becket realize the FBI have the wrong guy.

Gates announces that identifying the Hispanic is the main task. She tells Castle that she has a special task for him, she wants him to do a special project, pour over witness statements.

The next morning, Alexis makes Castle pancakes with happy faces on them, she wanted to cheer him up. He goes on to tell her he doesn’t want her at the morgue and she tells him that she is trying not to focus on the ugly side of things and this is her first job where she feels that she is doing something valuable.

Becket is thinking about her next move, the Hispanic has been identified as Bobby, they go and find him. They bring him to the precinct, his name is Robert Lopez and Becket interviews him. She asks him why he planted the bomb.

Castle in the precinct, Esposito tells him they have their man. He goes to watch Becket interrogate Lopez, he doesn’t remember everything because he says he was in shock from the bomb going off. He claims to have trauma but she doesn’t buy it, she tells him that she got shot in the chest and she remembers every minute of it. Castle is shocked at her revelation, all this time and she remembered.

Becket is finished interrogating and she comes out to find Castle is gone, he went to visit his mom. He tells her that Becket knew the whole time and she was embarrassed, he feels like such a fool. His mother wants to take him home and he wants to go back. She tells him that love is not a switch, he can’t work side by side with her and not feel anything, he tells her “watch me”.

Back at the precinct, Esposito finds out that the bomb did go off by remote. They discover that Bobby is a pick pocket, Becket re-examines him and asks why he didn’t tell the truth, he says why would he tell a copy he was stealing. He admits to stealing the back pack, then the bomb went off. He swears he didn’t know about it, he would never hurt anybody. It turns out that he stole the backpack from the bomber.

Castle keeps looking at diagram of the bomp site, Becket tells him that Jessee Friedman did it and they found stuff at his apartment for building bombs. Esposito finds that there must have been a partner to help Friedman. Castle goes over the sequence of events and figure out that Jessee’s partner was the news reporter. They bring her in and question her because she knew Jessee, they tell her they think she detonated the bomb. Becket shows her a cell phone they found that she used as well as a remote that had her finger prints all over it. She finally tells them the truth, nobody was supposed to get hurt and she was supposed to become a credible reporter. The FBI took Leanne Weston into custody, she will get what she deserves. Gates thanks everyone for all they did, they made her proud. Becket wants to go for a drink, but she gets turned down from everyone else except Castle, who hesitates, then tells her that he is heading home and leaves her there wondering what just happened.

Wow, is this the end of any possibility of a romance between Castle and Becket? Next week Castle is moving forward with his love life, without Becket.