BY Rosie Leblanc on May 7, 2012 | Comments: one comment
Related : Castle, Recap, Television 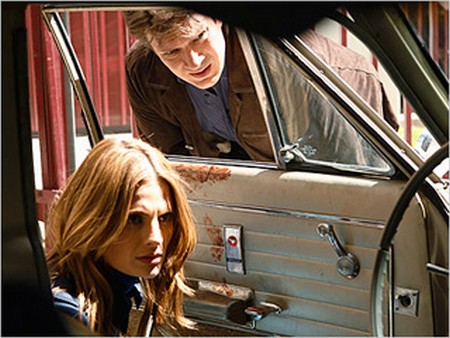 Tonight on ABC a the season final of the forth season of Castle airs.  The episode is called ‘Always’‘ and we will be live blogging the episode with all the up-to-the-minute details.  Can you believe another season of “Castle” is almost over and Castle and Becket are still not ‘together?’  It seems like season 4 just started.

On tonight’s show in the finale episode Castle finally comes clean and tells Becket exactly how he feels about her. Of course, we don’t know if there will be any wedding bells in the future for these two, but at least there is a start, a hope and the promo video shows Becket planting a kiss on someone, hopefully it’s Castle.

Here’s how Castle shares his feeling to Becket: “I think you are the most remarkable, maddening, challenging, frustrating person I’ve ever met. And I love you, Kate. And if that means anything to you, if you care about me at all, just don’t do this.”

Holy crap! I can’t believe he told her all that. Now we are left wondering, what the heck is her response? Does she return the “I love you”?  I’ll tell you one thing, if she doesn’t, then I think this will be it for Castle.

We will be live blogging the show with all the up-to-the-minute details at 10PM EST so make sure to come back to this spot and watch the show with us. Make sure to refresh often to get the most current update!  If you want to see some spoilers or 5 different preview videos before the show starts go HERE.

RECAP: Kate is hanging from a building and she falls. Now they go back three days, Becket doesn’t understand why Alexis is taking her graduation speech so seriously, Rick tells her after the graduation he is going to watch a movie, he invites her and she says yes.

There is a dead guy, Orlando Costas, execution style in a bad neighbourhood. Back at the precint, they discover that the victim was a thief, but he really cleaned up his act – he had a girlfriend, Marisol, but his parents are dead. Kate asks her if Orlando could have gone back to bad habits and she says absolutely not, he was trying to be a better father for his son.

On the scene of the crime, Kate, Rick and Javier figure out that it was a shoot out. There was a robbery at Captain Montgomery’s house, Orlando took his computer with files. Kate thinks this robbery has to do with her mother’s case, Montgomery did tell her that she was getting too close and they wanted her dead.

Rick is looking at Kate’s mother’s murder case. Martha wonders if the new case has anything to do with Johanna Beckett’s murder.

Kate tells Rick that the break-in wasn’t personal. Rick tells her that she’s not in this alone and that he’s there for her, she holds his hand but they are interrupted by Javier and Kevin who tell them that Vicente Delgado and Diego Gutierrez might have had something to do with the murder. The cops bust in and find Diego, they question him about Orlando’s death.

Javier tells Kate that it wasn’t Diego and the DNA on the weapon wasn’t his. The man who killed Orlando Costas in that alley is the same man who put a bullet in Kate’s heart.

Kate is surprised there were no leads for eleven months and now this, she doesn’t want Captain Gates to know because she’s sure she would be taken off of the case. Kevin tells Javier that this feels wrong and Javier tells him that Kate will investigate this case whether she’s on it or not, the least they can do is watch her back if she’s at work,

Rick gets a call from the guy he knows with regards to Johanna’s death. Rick is afraid that if Kate doesn’t stop, they will retaliate. The guy tells Rick that he can’t control the situation. Kate tells Diego that they have enough on the drugs and weapons charges to put him away for a long five years, but she knows that he didn’t kill Orlando and she wants to know why he was in that alley. She declares that she can make all of the charges go away, but he has to tell her everything he knows.

Diego said that Orlando was looking for work, but he didn’t give it to him and Orlando was desperate talking about how “they” would be killing him. Diego claims that Orlando and he where to meet, but by the time he got there, Orlando was already dead.

Marisol knew about the money, she just cleaned out their joint checking account. Kate confronts Marisol at the bank and tells her that she has some questions for her before she leaves town and this time she wants the truth.

Marisol tells Kate that she didn’t know anything about the money until today. Kate threatens to put Marisol’s kid in custody and he’ll be on the street at 10 in the Casadores gang just like his father. Mrisol caves in and tells Kate that he did a one-off job for a lot of cash.

Rick and Kate go to the church Marisol was talking about, but the priest says that new people come in all of the time. They check out the church’s surveillance video, but it cuts off  and doesn’t show who Orlando was talking to. They freeze the video and see what the killer looks like.

Javier is looking over the footage of the killer and freezes it when he sees a keychain in his hand from Eastway car rentals. Rick goes to see Kate and begs her to stop the investigation. She says she’s in control, but he doesn’t think she is. Rick tells Kate that if she doesn’t stop the investigation, they’re going to kill her. Before Montgomery was killed, the killer sent his friend a package and he tells her about the deal that Montgomery’s “friend” to keep her safe. She asks if he was a part of this and he says that he was only trying to protect her. She is shocked and wants to know how he could keep this from her. He says that he loves her, but she already knows that for a year now, doesn’t she?

Rick goes on to tell Kate that he’s more than a partner. He tells her that every morning he brings her coffee just to see her smile. He loves her and if that means anything to her, she would stop this now. Kate tells Rick that it’s her life and if she wants to throw it away, she can, Rick is not going to stick around and watch. He tells her this is over, he’s done and walks out.

Rick goes home and Alexis asks if everything is okay. Alexis compiled all of the best speeches together and then reads it aloud. She says she sounded like a “pompous ass” and is worried that everything is going to be different with moving on.

Kate is at her mother’s grave, crying about what she’s learned. Back at the precint, Kate goes up to Javier and Kevin and when they ask where Castle is, she tells them that he’s off the team. Kevin tells her that she can’t go in there unprepared, they need to put a car on the location.

At Rick’s house, he’s getting ready for the graduation. Kevin tries to call him, but he doesn’t pick up the phone. Javier runs up to Kate to tell her that Maddox is there on a one-term lease. They check the area and find Montgomery’s files. The perp also had Montgomery’s wedding album and they’re looking for someone he knew.

Kate and Javier get tackled to the ground by a guy who wants the files. Kate gives chase with her gun but he comes up behind her. She tries getting him in a chokehold, but the guy fights hard. He’s got her on the ground and tells her she’s wasting her time and she has no idea who she’s up against. She says, “Neither do you.” Kate ends up hanging onto a ledge for dear life and the guy leaves her. Kate is gripping the ledge, she sees the bottom of the street and starts thinking of Castle, calling his name. She losing her grip and Kevin comes there just in time to save her. He grabs her arm with a group of cops and Captain Gates is there looking very unhappy.

At the precinct, the Captain tells Kate and Javier to hand over their badges and guns. Kate tells the Captain to keep it , she’s resigning.

At Alexis’ graduation, she is delivering her valedictorian speech, meanwhile Kate gathers up her things from the precinct and leaves it behind.

Kate walks outside and it’s raining, she stops at a park and sits on a swing and gets drenched.

Back at Rick’s house, he’s on the phone with Alexis. He tells her to have fun, he then gets a call from Kate and he turns his phone off. He turns his computer on and deletes Kate’s file. There’s a knock at the door. It’s Kate. Rick asks her what she wants and she says “YOU.”

Kate tells Rick that she’s so sorry and she kisses him. He asks what happened and she tells him the killer got away and she didn’t care, she can only think about him and only wants him. The two start making out and it has to be one of the steamiest scenes on tv yet, Kate leads Rick to the bedroom and the rest is left to our imaginations. The chemistry between these two is electrifying!

Captain Montgomery’s friend “Smith” gets a visit by the killer who wants all of the information that Smith has on the killing and after he gets it, he’s going to put Kate in the ground.