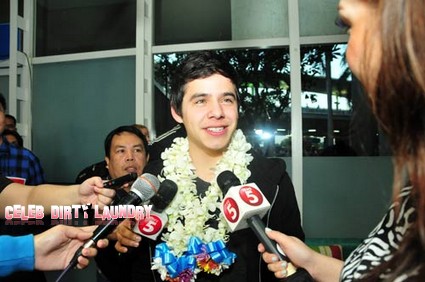 American Idol runner-up David Archuleta, 21, arrived at the Ninoy Aquino International Airport in Manilla, Philippines on January 13, 2012, and was met by a lively group composed of supporters, the media, and a welcoming team from his network affiliate, TV5.   David accepted a part in the TV5 series, Nandito Ako out of love for his Filipino fans, all of whom, he said, have been very supportive of him.

David  was met by his new co-stars (picture below), Jasmine Curtis Smith (to David’s right) and Eula Caballero (to David’s left) at the NAIA Terminal 2.  David will work closely with the two young actresses in the upcoming TV5 series, Nandito Ako.

At a recent press conference David said about the role, “Even though I may not be a [professional] actor, I thought this [acting stint] would be a really great new experience to try. Especially in the Philippines because I feel very comfortable with the people and I feel the fans here are very warm.”

David will be in the city for three weeks and hopes to have lots of fun.  It is not the first trip for David he has been to the country four times prior to this visit.

The exclusive photos are courtesy of a very special friend of Celeb Dirty Laundry who lives in the Philippines!  Click on the thumbnails below to enlarge more pics of David, Jasmine and Eula!