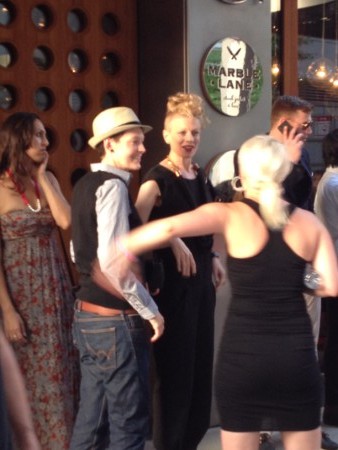 Fashion Star winner Kara Laricks and her girlfriend stopped by Life & Style Weekly’s Summer Style party at the Dream Downtown hotel in NYC last night. The reality winner excitedly introduced her girlfriend while the couple posed for pictures outside the hotel.

Laricks joined other reality celebrities like Real Housewives of New Jersey stars Melissa and Joe Gorga, Pregnant in Heels maternity concierge, Rosie Pope and Keeping Up with the Kardashians’, Khloe Kardashian for the annual bash which announced the magazine’s summer style awards, including trendiest TV star and best designer bag designer. Laricks wasn’t up for any awards but tweeted her excitement for the party throughout the night.

She tweeted, “Uh oh… We found the photobooth…” and “Thank you for hosting such a swanky stylie event tonight!”

It’s been a long journey for the former fourth grade schoolteacher who after winning the ultimate prize told millions of viewers, “I feel so overwhelmed. I don’t know what to say. I’m so thrilled… at the opportunity to keep going and keep designing. This is so exciting, so thrilling!”

Laricks won a $6 million collection deal with H&M, Macy’s and Saks Fifth Avenue and recently told Rolling Stone magazine how it felt to see her designs displayed for the world to buy. “[I’m] so thrilled that I was able to see a full garment hanging in the store that people could buy that was the essence of me, and then, if there were details that were left out or altered, I was kind of like, ‘Ah, I want people to know exactly what it is that I designed.’ But overall, I’ve been thrilled because I feel like the essence of me is there and the spirit of what I stand for and who I am is there in the collection. Ultimately, is it a reality TV show and people are connecting with personalities and philosophies. I feel like as long as that comes through in the collection, I am so fortunate and so grateful.”

Have you had a chance to check out her winning collection? Tell us what you think!