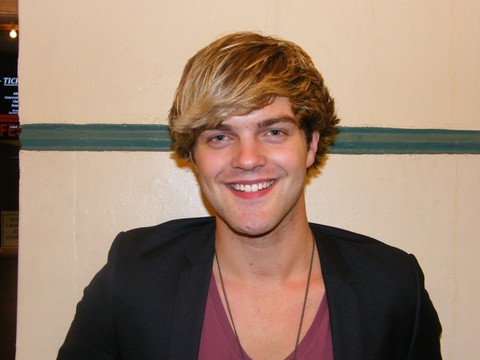 Constantin Stanislavski, the father of method acting, once said, “In the language of an actor, to know is synonymous with to feel.” Little did Stanislavski know that one such actor, who goes by the name of Harry Cook, knows this language as fluently as his mother tongue. Born in London, England, and raised on the sun bleached beaches of Sydney, Australia since he was 10-years-old allowed Harry the opportunity to follow his dreams and become one of Australia’s most popular up and coming actors.

In 2009, Harry was cast alongside Geena Davis in Accidents Happen, and as they say, the rest is history. The following year, Harry was cast as Archie Cox in the claustrophobic thriller, Caught Inside. Today, after numerous film and television appearances, Harry is working on his most courageous project yet – a tough and enthralling drama about homophobia. The film, titled Drown, is a micro-budget independent film with a hard-hitting social narrative set against Bondi Beach’s blonde coastline. According our sister site, Celeb Teen Laundry, “The film’s title also surreptitiously acts as a double entendre – the physical and literal drowning of a person, and the emotional suppression that is exerted upon someone who does not necessarily fall into the societal categories. The emotional claustrophobia acts as a beacon in the underbelly of society, and Drown threatens to expose this relentless issue that has been as so far untouched by recent mainstream cinema. The film will not only usher in an epoch of bullying-awareness, but it will also make homophobia a visible and relevant issue.”

Celeb Dirty Laundry had the great pleasure to ask Harry a few questions about his career, his future in the film industry, and his greatest aspirations.

Give us a short history about where you started in the film industry, how long you’ve been an actor, etc.

I started out at drama clubs pretty early on. I think I was around 4 or 5 when I first got involved in it. I did some stuff at Helen O’ Grady’s Drama Academy & Stagecoach in London and just trained here and there wherever I could. It wasn’t until later on that I got more professional work though.

If there’s any film stars out there who you could work with, whom would it be and why?

There are SO many. I would love to work with Meryl Streep, but I think that’s a given for any actor. Emma Thompson, Tom Hanks, Dustin Hoffman, I could go on all day.

What is your dream role?

I like playing people that have something incredible to overcome. I think those types of stories & characters are the ones that I got involved in acting for. Being able to bring some sort of reason behind some peoples actions is always such a great challenge. I’d love to play a role like Leonardo DiCaprio did with “Basketball Diaries”.

What are the biggest obstacles in the film industry you have not yet been able to overcome?

Not getting the parts you love is a tough one. Especially if they are looking for a 6 ft green eyed, brown haired person with a birth mark on their left shoulder. It’s tough because sometimes you may just not fit what they’re looking for, no matter how well you can play the part. So that’s tough, but it’s part of it all, so that’s ok.

What inspires you in life?

Being able to one day turn around and say I gave it my best shot. I’d love to get to 80 and know that there was nothing I could’ve tried harder at.

Who is your biggest hero in life?

My Mum. She is such an amazing person. She always cheers me on and is there for me. I love her to bits.

Who is your favorite actor?

What is the most important goal you are striving towards?

I just want to keep telling great stories and doing great work. That’s a goal that I don’t think will ever go away because there are just so many stories to tell.

What are the upcoming plans for Harry Cook?

I’m doing a movie at the moment called “Drown”, then after that I have a few other things in the pipeline and I’m hoping to get back to LA again very soon. I love it there. Home away from home.

What is your favorite film(s)?

The Goonies, Kramer Vs Kramer, Basketball Diaries, I have a list of about a thousand, but they are the first three that came to mind.

What inspired you to take up acting in the first place?

It was something fun to do as a kid, but as I got a bit older I realized I loved doing it because it is such an incredible way to escape from your own life for a period of time. That sounds morbid, but I mean it in a way that is really nice. I love being able to play someone else and get out of my own self for a few months. It just gives me a better perspective on life.

What is the most difficult acting moment you’ve ever experienced on a film set?

The breakdown scene in “Accidents Happen” was really tough. But also, more recently, “Drown”. I haven’t begun filming but rehearsals have been intense. My character joins in & submits to attacking a guy just because he’s gay, even though he himself has no bad feelings about homosexuality. It’s incredibly difficult playing someone like that because I have had to somehow find meaning and reason to why he stands by and lets it happen. It’s exhausting, but luckily my character eventually stands up for what’s right.

What do you like doing when you’re not shooting a film?

I love spending time with family & friends. The beach is probably my favourite hang out. That or a coffee shop. I’m not really a party-goer so I like a chilled weekend more than anything.

And finally, where in the film industry do you want to be in 5 years’ time?

Still doing this! I love working and I love portraying interesting people. If I can keep doing this, then I’ll be happy.

Tell us more about your latest film, Drown.

It’s about three surf lifesavers in Australia, one who comes out as being gay, and the horrendous results of what homophobia has on people.

Tell us more about where readers are able to read about Harry Cook.

I’d suggest not looking on Google because I’ve had a nose at some articles on there and it’s total crap. SO false.But worth a laugh if you feel like it!

Tell us more about where readers will be able to connect with you e.g. Facebook, Twitter, etc.

I’m on facebook occasionally which you can find me at here: www.facebook.com/officialharrycook but I use Twitter so much more & I reply to everyone!! www.twitter.com/HarryCook