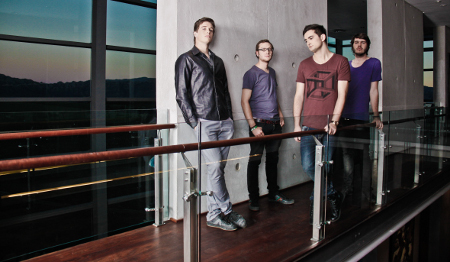 3rd World Spectator is a name synonymous with one of the biggest bands in Sub-Saharan Africa. Peter Crafford’s lead vocals have been described by several music critics as “some of the best vocals in the current music scene.” 3rd World Spectator induces a sense of longing and melancholia in their music. The tracks are streamlined to suit the vocal power of Crafford’s intense falsettos and poetic lyrics. The music is stitched with universal appeal, yet is unique enough to cross almost all current pop/rock boundaries. Muse-esque musicality mixed with a dollop of haunting vocals, offers the listener a climactic tour-de-force, unparalleled in the aesthetic of modern music.

Listening to 3rd World Spectator’s debut album “The Theory of Everything” does not result in the contrived and contrasting candy stick pop ballads one is so accustomed to. No, their debut album is an artistic saving grace, which woefully reminds you of your deepest and most untapped emotions.

Celeb Dirty Laundry had the opportunity to do an interview with Peter Crafford and find out about what makes him tick.

Who has been your biggest musical and personal inspiration?

Two artists have consistently stood out as influences on me, and they are Sting and Matt Bellamy from Muse. I love the way Sting writes songs and lyrics and how Matt Bellamy just goes for it in terms of his singing style and the way he approaches songwriting.

What do you think is the greatest album/song ever released and why?

Too difficult to say at this stage of my life, but three albums that have had a profound effect on me would be OK Computer by Radiohead, A Rush Of Blood To The Head by Coldplay and Absolution by Muse. During my formative years, these albums gave me a solid musical base from which to work from.

Depeche Mode sang about their “Personal Jesus”, who is yours?

Do you think shows such as American Idol and X Factor truly deliver music stars? Or are these shows merely fads which do not deliver any real value?

I think some great artists have emerged from these shows, especially someone like Adam Lambert. I do think however that the perception that the shows maintain that you can create instant stardom is absolutely misleading. Getting ahead in the music industry is a tough job and it takes hours of practice and honing your craft.

Who is your favourite celebrity (non-music) and why?

I’d have to say someone like Leonardo DiCaprio, who is a consummate artist who consistently delivers in his craft.

This is Celeb Dirty Laundry, so you have to air some of your own dirty laundry. What weird habit do you have that no-one knows about?

I collect action figures and comic books. I am a bonafide geek and I’d prefer an evening with the XBox as opposed to partying in a smoke-ridden bar.

If you could have any film star play your life story, who would it be and why?

I think someone like Gael Garcia Bernal, and I have absolutely no idea why. Haha

If a novel could be written about your life, what would it be titled?

Collect ‘Em All: The Chronicles Of An Action Figure

Simon Cowell because of his unrelenting desire to be the most successful person in entertainment.

“Ambulance” was the first single off your album “The Theory of Everything”. What is the sub-text of this song and what inspired you to write and compose it?

I wrote the song one morning before class in my second year at university whilst defrosting a chicken, and at that stage I was toying with the idea of using an ambulance as a form of transport that carries people over to the other side as they pass away. I wanted to use this concept as a painting but then it became a song and the context changed to that of somebody who is earnestly asking to be saved.

What is the meaning behind the band’s name, 3rd World Spectator?

The name originates from a clothing shop that existed during the 80’s in Johannesburg. When I was sixteen years old my mom told me a story about the shop owner who saw her in a grocery shop and said she looked like a rock chick. She mentioned the name of the shop and it stuck throughout high school and university. I always liked the name because it isn’t something specific and serves as a conversation piece.

What is your favourite song on The Theory of Everything and why?

I really like the song “Sparks” as I feel that is the song that sums up our sound rather well. We love using a “quiet/loud” dynamic in our repertoire and that song thrives on dynamics. It’s also extremely fun to play live.

The Theory of Everything is a concept derived from physics, so why did you decide to use this as the title of your debut album?

We wanted a title that could describe the various elements of rock that we work with. The title also served as an umbrella concept for the lyrical contents of the album, as we focus on four themes throughout the record: war, love, religion and science.

If you could describe your music to a complete stranger, how would you describe it?

We always refer to it as the “calm before the storm”. We’ll literally go from a piano ballad to a Rammstein-esque epic within a matter of minutes.

You’ve taken the South African music industry by storm, what does the future of 3rd World Spectator look like?

We just want to stay on the road and play to as many new audiences as possible. We are looking to do an international stint within the next year, but a lot of logistics go with a decision like that.

Do you have plans for Europe and USA?

Indeed we do. We just need to get everything ready from our side, such as finances, record and management deals.

If you could play in any venue in the world, which would it be?

Wembley Stadium. To us that is the holy grail of live music.

Where can new international fans get hold of your music?

Which record label are you signed to?

We have signed a recording contract with Universal Music Group.

How long has 3rd World Spectator been up and running?

We have been going for about 4 years now, but the past year has felt like our first proper year, as we have a lot things in place that we didn’t have a few years back.

If there is one influential person who could listen to your music, who would it be and why?

Probably Jimmy Iovine. He is the most influential A&R person in the world right now.

Do you have any music videos out? If so, where can they be found?

We do have a music video out for “Ambulance” and we will be filming the video for the follow up single “Sparks” shortly. You can find it on Youtube! Check it out below:

Why music? Why not something else?

Music is like cheap therapy. I get everything out that I want to say, but way easier than going to a psychologist. I also do graphic design by day, so I’m very fortunate to do the two things I love most. With the video for “Sparks” I’ll be directing, so let’s see how that goes.

Have you or your band experienced any crazy fans? Please tell us more about this experience.

No we love our fans, if they get crazy, we don’t really mind.

~Make sure to check out their music below~