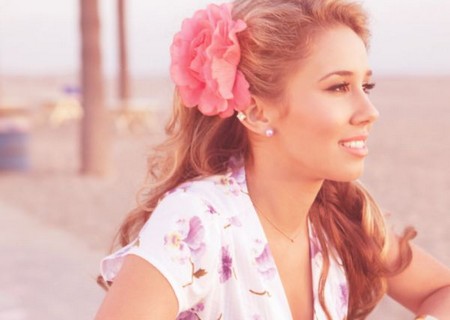 Celeb Dirty Laundry had the privilege to speak to ex-Idol alumni Haley Reinhart about her career, Casey Abrams and American Idol. Haley’s candid and loving demeanor reverberated in every aspect of the interview.

The singer released her debut album earlier this year to critical acclaim. Rick Florino of Artist Direct said about Listen Up!: “Start listening now because Haley Reinhart has made one of the best debuts of 2012, and she might just help revive a little old soul in the process.”

Haley might just be one of the sweetest, most endearing and most eloquent celebrities we have ever spoken to. She is the powerful voice of a soulful generation. Haley is as gentle and as kind as a whisper in a hurricane. An artist with one of the most promising careers of any ex-American Idol contestant, Haley is the quintessential American sweetheart whose music must be preserved by the finest of soul music connoisseurs.

Your debut album “Listen Up!” was released to critical acclaim. You have been compared to Adele. How do you feel about this comparison?

I think it’s very cool you know, like other artists that come out like Adele and Amy Winehouse. They all have this organic, raw side to their music and then it’s a little bit retro. You know, it’s been my influences forever. I think it’s a wonderful compliment and we’re a lot different as well, but where people are coming from, I think that they’re hitting it on the head.

You have recently done a Ray Charles classic with fellow Idol alumni Casey Abrams. How was it working with Casey again?

Oh, he’s wonderful! I can’t get enough of Casey. We are musical soul mates. I really respect him as a musician and an artist and the fact that he had me do another song, “Hit the Road Jack” for his album is an honor. I know we’ll continue to do more collaborations together.

Did you two remain good friends after American Idol ended?

Yes, yes, me and Casey have. Me and most of the contestants are all based out in L.A. now. You know, I am from Chicago, but we’re all kind of in this melting pot out here in L.A. together, so whenever I can catch up with them, it’s a really nice thing. I keep in touch with most of them, so that’s really nice.

What has been your greatest challenge with your “Listen Up!” album?

Well, in the beginning it was jumping into the co-writing process, but I quickly caught on and it became so much easier, because you know I wanted everything to do with the process, so I really, really enjoyed that. I just can’t wait for the next one and have a hit coming around.

What was the inspiration behind the “Free” music video?

That was also an idea of mine and Christopher Sims (Lady Antebellum, One Republic, Daughtry) the director. I feel like Free is a throwback to the great times of the 50’s and it has that sultry and playful aspect. I felt like the song itself is kind of heavy, even though it’s a lighter break-up song, I still wanted to maintain a playful aspect to the video, so I thought an ice cream parlor would be a cool idea.

Do you think American Idol is a great platform for young musicians and why?

Most definitely, when I was younger I always saw myself being on the show, but at the same time I thought, if I can’t, I would try to make it on my own. Going through this whole Idol process, I found that there’s not a lot of agents being at clubs and everywhere else, looking for the next big thing. What it is is all these technical advances that we have now, like the internet. American Idol can make voices heard, so I think it’s an amazing platform for young children. I don’t know what I would do without it right now.

“Free” was featured on a dance sequence of So You Think You Can Dance? What has this exposure done for your career?

Yeah, this has just happened yesterday (25th July 2012). I’m really, really excited! I think it’s great and I heard it climbed the pop charts on Itunes already? I’m just hoping that it continues and that people really get to listen to it and it catches their attention and they can go look up the album.

What advice do you have for aspiring musicians?

I just went over to the Grammy camp and worked on a panel and you know, this young generation that’s coming up is so very talented and they have so much to offer. Whatever they believe in, they should really go for it! You shouldn’t wait around for something to happen. You have to work very, very hard and be very dedicated to your passion.

What is the one thing the music industry has taught you, which you will value for the rest of your life?

I’ve learned so much! Coming from a musical family, my whole family being musicians, for me it’s the musical aspect. I was organically born into it, but on the other hand, I really didn’t know much at all about the production and all the business side. I’ve learned a lot about the business and how it works and how to be an entrepreneur and I know to be my own mascot. The most important thing that I have learned is to listen to my intuition and my heart, because that’s led me this far.

Who is your biggest hero in life and why?

I guess a lot of credit goes to my parents, because they love me! Haha! They’ve taught me everything I know and had me grow up with great music. They’ve put a good head on my shoulders; at least I’d like to think so. They’ve prepared me in a lot of ways.

If there is one musician you could tour with, internationally, who would it be and why?

There are a lot of different people that I would like to work with. It would be so cool someday to be in the company of people like Esperanza Spalding or even somebody older, like an older legend, like Al Green. It would be amazing!

That was fun! I used to act being younger and I thought it would be so much fun to get back into it. You know, it was interesting because I had to play myself, with lines! That’s a little bit trickier than playing a character!

Are you aware that you have a massive fan following in South Africa (and around the world)?

Oh goodness, I think that is like incredible and that’s just one more thing that goes to show how important a show like American Idol is, because I didn’t think I’ve reached you guys!