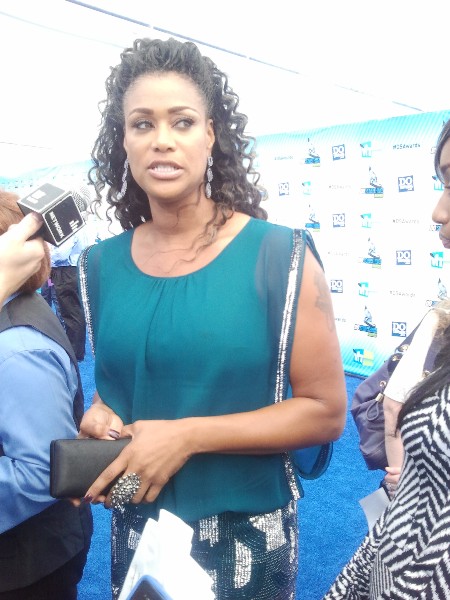 Celeb Dirty Laundry had the awesome opportunity to chat with Basketball Wives star Tami Roman on the Do Something Awards blue carpet yesterday in Santa Monica. The reality star wowed in a teal ensemble with towering heels but her admissions were even more stunning. One of the original break out reality stars, Tami is no stranger to getting viewers’ attentions, nor the conflict that usually follows. But she’s learned a thing or two since first starring on MTV’s The Real World Los Angeles in 1993 and isn’t shy about sharing all she knows.

“Everyone asks me, you know, I have people who email me all the time telling me they are going to audition for The Real World and I say don’t do it because I just think the genre has changed,” she said. “I try to be as real as I can be in any moment and I think a lot of people are using reality TV as their 15 minutes and trying to snowball into a thing and get camera time and not really address issues and problems and things that are really happening in their lives.”

Tami has never shied away from doing just that. She famously let the cameras follow her when she had an abortion during her season on The Real World and has discussed being raped on her current show, Basketball Wives. But her open door policy has not always endeared her to the show’s fan base. She admits the last season was difficult for her especially after viewers voiced outrage when Tami appeared to bully fellow Wife, Kesha Nichols, to tears.

“We’re showing it good bad or indifferent you know. I had a tough season this year because I’m just always going to be me and sometimes that comes back to bite me but I think part of life is putting those things out there and learning and growing from them. The best way I can show people I have achieved something is to put my flaws out there and progress from them,” Tami said, adding there is more to the ladies than just drama and fighting. “For me in particular with our show Basketball Wives I think that people don’t really understand that we are out there and we have charitable works that we support and I want to totally represent my show.”

She also wants to support her cast mate. Evelyn Lozada has been in the headlines lately after she decided to put an end to her 41-day marriage to NFL star, Chad “Ochocinco” Johnson. Her filing came just a few days after Johnson was arrested and charged with a domestic violence misdemeanor. He allegedly head-butted Lozada during an argument. Tami said she was not aware of all the details but is thinking of the couple. “I like both of them so I’m not going to speak out of context on their situation since I wasn’t there firsthand,” she said. “I think they both handled it very gracefully and I hope they can work through it whether they choose to stay together or not. I just wish them both the best.”

Do you appreciate Tami’s self-awareness? She’s said in the past that she’s going to work on her behavior for next season and be someone her daughters can be proud of. Do you think Tami can change?