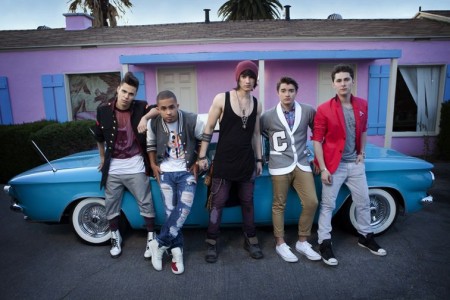 Midnight Red is one of the newest boy bands to hit the music scene and follow in the signature footsteps of previous teenage hitmakers like the Backstreet Boys and New Kids on the Block. The group of five Americans even joined the superstars and opened for their tour last year. In taking the time to learn from the past and study the examples of the older heartthrobs on stage, Midnight Red is hoping to shape themselves as the boy band of the future.

“Working with the two most well known boy bands of all time was a great pleasure,” the band told CDL in an exclusive interview. “Watching them night after night, showing pure skill and a professional craft was definitely inspiring to us as a young group. Brian Littrell of Backstreet explained to us that the only way to succeed in this business as a group is to form a strong unity between us, that way nothing or no one could come in between our goals and our vision.”

The band jokes on its website that “world domination” is part of that vision, but Joey Diggs Jr., Thomas Augusto, Colton Rudloff, Eric Secharia and Anthony Ladao are set to release their debut single, “Hell Yeah” and will settle to get people dancing for now. “Our music is very dance driven and will definitely get you up out of your seat! Our aim is to bring ‘feel good music’ back into the world,” they said. “As a band, we really want to share our talents with the world; there’s nothing better than knowing that your hard work and dedication to a craft has the potential to put a smile on the face of another individual.”

The pendulum has swung and groups like Britain’s One Direction have showed that boy bands are making girls scream with hysteria again. Midnight Red is ready to make a similar impact and has taken its time to make sure its product was just right. The group came together in 2009 under the guidance of Pete Farmer and producer RedOne and says it differentiates itself from previous boy bands by its ability to sing live while emphasizing a dance element on stage that others “haven’t touched.”

After the success of its digital EP, “One Club At a Time”, the group is releasing an upcoming full-length album, but “Hell Yeah” is currently available on iTunes. The group believes once fans listen, they will want to come back for more. “What we want people to walk away with from a Midnight Red show is the experience that they just left the most crazy party ever, and that they can’t wait to go back for a second round!”

Check out the band below. What do you think of its signature heart-pumping sound? Are you ready to get up out of your seat and start dancing?