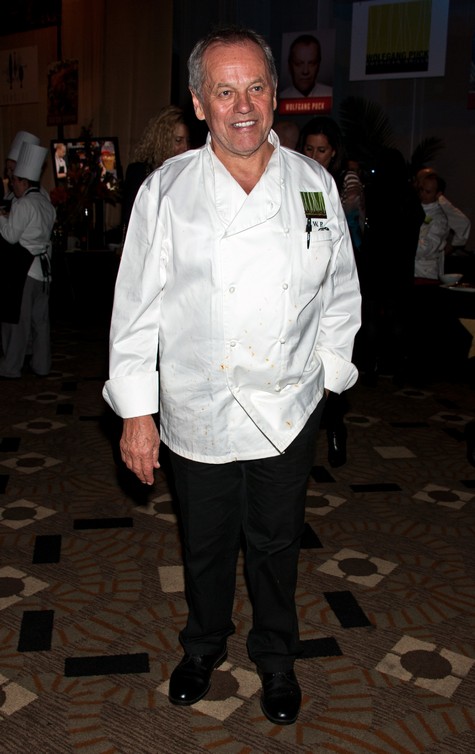 Wolfgang Puck has been described as the greatest chef in the world, a master of his art, and a really cool guy. This was evident when Celeb Dirty Laundry had the incredible honor to interview this culinary legend. The 64-year-old Austrian restaurateur is the mastermind behind Spago, “The flagship of Wolfgang Puck’s fine dining restaurant empire.” The series of well known restaurants – situated in Beverly Hills, Las Vegas, Maui, and Beaver Creek,  “present imaginative, seasonal American cuisine with global accents.” Chef Puck is also the brilliant mind behind the annual Governor’s Ball menu. This star studded event takes places immediately after the Academy Awards and draws Oscar winners, Oscar nominees, and the Hollywood elite.

This year, Chef Puck’s Governor’s Ball menu contained over fifty dishes, including “one-bite hors d’oeuvres and small-plate entrees that were passed throughout the evening. These included smoked salmon on Oscar-shaped flatbread, chicken pot pie with shaved black truffles, lobster tacos with tomato and pickled shallots and beet salad with pistachio butter, burrata and citrus balsamic.” The menu also featured “macaroni and cheese, braised short ribs with parmesan polenta, lamb chops with a mint cilantro vinegar and baked potato wrapped in gold with caviar and creme fraiche.” The famous Oscar desserts were “gold-dusted chocolate Oscars and another sweet treat from pastry chef Sherry Yard that pays homage to the future of film – a ‘staircase’ of chocolate mousse and chiffon cake leading to a white-chocolate Oscar placard.” Yum-o!

Chef Puck will be starring as one of the judges on the 10th season of Bravo’s super hit show, Top Chef. This time around, the culinary artistes will battle it out in Seattle, Washington.  Chef Puck was not only quizzed by us on the artistry of food, but was also quizzed by Pop Culture Passionistas on how he would have fared as a young chef on this hit reality television show.

In true Chef Wolfgang Puck style, he opened up about his past, his aspirations, and the causal events that brought him to where he is today, “You know, it really – I was thinking about that a few times when I was the judge and I actually did also Iron Chef, you know, when I was already – that was maybe eight years ago or something like that, seven years ago. It really would depend at what time of my career. Don’t forget, you know, you don’t know, but I shouldn’t say don’t forget, I started to cook professionally when I was 14 years old. So by the time I was 24, I already did that for 10 years in some of the best restaurants in the world. So I think even at that time probably I could measure up, yet it’s a different level now, it’s a different playing field. You know, I mean at that time in America you did not have as many talented young chefs and young chefs who worked hard and are really, really, really good at it. So the competition was less, but nevertheless there was a competition. And I think you can feel the competition. When I was 25 I was a chef in a restaurant called Ma Maison. And, you know, it’s a competition to get every customer to come back.”

What do you think makes for a world class chef? Do you think it’s the palate, the artistry or the   imagination?

Do you believe a chef is the same as being an artist?

I think a chef is a mixture maybe of artistry and craft. You have to learn the craft really to get there. And then you could be called an artist if you make it artistically, you know, if the dishes are [artistic], but it’s more a craft than artistry.

What is your comfort food?

The Emmy and James Beard Award-winning series, “Top Chef: Seattle,” returns for its tenth season on Wednesday, November 7 at 10 p.m.  ET/PT on Bravo. Set your Tivo, lick your lips, and prepare for a culinary battle of blockbuster proportions.

For a sneak peek at Wolfgang Puck on “Top Chef: Seattle”:

For a sneak peek at the season:
Image credit: Paul J. Froggatt