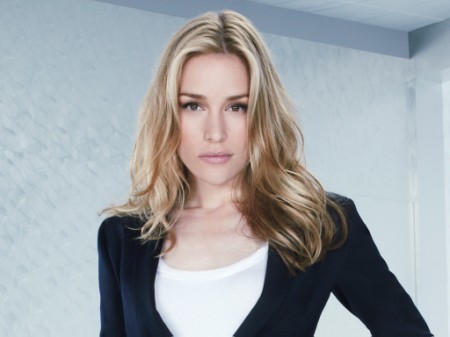 Covert Affairs’ creators, writers and executive producers, Matt Corman and Chris Ord sat down with CDL and answered questions regarding their hit USA Network CIA show. Starring Piper Perabo and Christopher Gorham, Covert Affairs delves into the secretive and scintillating world of espionage as well as the balance that needs to take place between unorthodox professions and orthodox everyday lives. Now airing the third season, Ord and Corman spoke to CDL about the challenges they’ve faced this time around writing episodes with longer, more arched story lines and the increasingly high standards they put on themselves in imagining this international world of mystery.

On the ramped up faster pace of the third season:

CO: Well, yes, I would just say that the short answer is yes, we made a conscious choice to kind of amp up the stakes this season. You know, we really see this season as Annie’s teenage years of the CIA and with those teenage years comes everything that comes with teenage years, be it more question, more passion, more – and, you know, along with that is greater stakes and I think for us we just want to make sure that the stakes are equal to the long arch sentiments we are trying to convey.

MC: And the one thing I would add to that is in addition to the faster pace you mentioned, there is more long arch storytelling. In the past I think we focused more on compartmental episodes to tell the story at a week and even though we certainly still do that, it’s more of a novelistic approach with more mythology this year which hopefully you’ve seen and recognized as well.

On Annie growing in her role and becoming more isolated:

MC: Yes, I think as Chris said, the analogy of a teenager is in up form, which is she’s starting to want, crave and experience more independence. I mean, there are still key relationships in her life, so she may not be isolated but I think she is yearning for a little more autonomy and she’s getting it. But like everything you want when you’re a teenager, it’s a two-edged sword, and what you want may not necessarily be what you need.

On the extensive travel done for the show:

CO: You know, we have certain things that the story dictates that certain things take place in certain countries and if that – some of the case, we look into ways that we can shoot there and then sometimes it’s a question of the country being interesting and creating a good backdrop for a spy story and we’ll write to that. I think for us, you know, started doing this, you know, as early as season one and then last year we really explored it even further with trips to Venice and Berlin and Stockholm and Paris. And for us it’s a spy show, so that needs to reflect that there’s an international intrigue spy story going on. We found a way to do it on budget and get our actors over there and it’s been a big addition to the production value of the show.

MC: Yes, gorilla film making is a good way to put it. We usually go with, you know, maybe six or eight people and then we pick up local crews when we’re there. And it’s run and gun. I mean, we need an actor like Piper who’s comfortable with, you know, changing wardrobes in the street or in a restaurant and literally runs from location to location. You have to be as excited by foreign travel and as game as Piper is because it’s not glamorous. It’s just about running like maniacs to get what we can. But it’s one of the things that we’re most proud about with the show because very few television programs and certainly very few cable shows are going to the great lengths that we are to have international components. And I think our first – well, seven of our first eight episodes have some international component to them.

On the popularity of Auggie’s character:

MC: We’re not surprised at all. Chris Gorham is a fantastic actor and from the very earliest moment of the show, we can see that he and Piper had this incredible chemistry that you just can’t fake. We do have to make the missions and action components that he’s in authentic to his blindness. We would never want to put him in a position or put the character in a position that seemed fake or where an audience member is saying, “Well, I’m not sure how a blind person could literally navigate that.” So it requires a far amount of thought to find seamless organic stories to tell that fit his skills and also his limitations.

CO: But it’s a fun challenge in the sense you get to create action set pieces and things that you wouldn’t otherwise get to create. You know, I think if you saw last week’s episode where Auggie and (Parker) were forced to jump from building to building, and it has an inherent drama intention to it but it came from character. And for us, it’s those situations that, you know, are unique to Auggie that we get to do for the series so we get really excited about.

Challenges between seasons 2 and 3:

CO: And to create a season of stories that fits seamlessly but also mesh with the individual cases of the week has been probably the greatest challenge but it’s a fun challenge for us. I think last season we’re a bit more compartmentalized which was fun and great on its own right but this season we’ve been allowed to kind of stretch our legs and find some character stories that we believe in.

On creating a show with an unusual home base of the CIA:

MC: I think, you know, workplaces are like families in the best senses and also in the dysfunctional senses and, you know, we always – well, even stepping back, I mean, one of our initial thoughts with this series was a lot of times the CIA is not looked at as a traditional workplace and we wanted to look at the Langley as a workplace in the same way the hospital shows or cop shows are workplace shows. So we wanted to kind of get in touch with the more humanistic side of what it means to go to CIA as a job. And then, as you were saying, in the best scenarios, workplaces are sort of proxy families with mother figures, father figures, siblings, et cetera.

CO: Well, I would say the experience of that I think man or woman in the CIA, it’s just a very intriguing job. I think the approach we’ve taken is to recognize that it is a job, as Matt alluded to earlier. And, you know, these are people who do extraordinary things but then have to go home at night and, you know, see their spouses or talk to family and, you know, still have to live normal lives. I think, you know, we have Annie in our series and certainly Homeland is a great series. And then – you know, there’s been the Bourne series and there’s been the Bond series. I think for the audience as a whole, spies are presented in allure in the terms of the job they do and the lifestyle they live. You know, we – I mean, I’ll speak for Matt and myself, we just find it fascinating the lives of these people and the more we get to explore it, the more fascinating you find it.

On the great staple of character actors they get to work with:

CO: Well, I think we’ve been very blessed up here, there’s a lot of great talented actors up here. We’ve had – well there are few guest stars that we are very excited about going forward. I mean, first and foremost, the two that we’ve already introduced being Sarah Clarke and Richard Coyle. We just couldn’t be happier. They both bring just phenomenal talents through their role and roles get more rich and more engrossing as the episodes go along. I’m trying to think of the episode we have coming up. We have an actor named Nestor Serrano in episode seven where we’re really excited about. We’re shooting now with an actor named David O’Hara who we’re really thrilled about. So for us, it’s been a fun season because I think the guest stars we’ve been able to get have just really taken their roles and ran with them and it’s just been fun to watch.

Covert Affairs’ third season can be watched on Tuesdays at 10pm EST on USA. Take a preview at the upcoming episode. Has anyone watched the show from the beginning? Can you appreciate the ramped up episodes? What do you think of Annie growing up and branching out more now that she isn’t so green? Do you like the way it’s playing out?