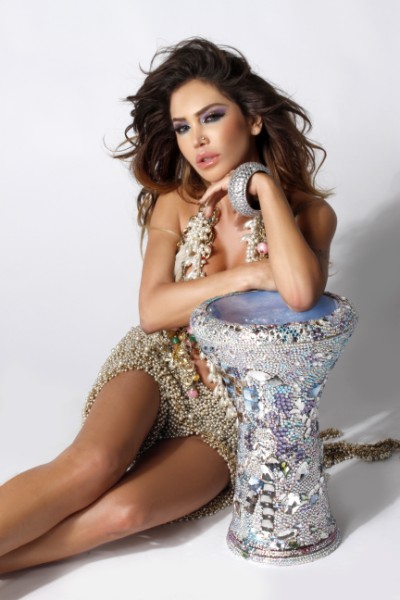 Israeli singing sensation, Hayla, describes her eclectic sound as “fusion” and balances musical genres with hypnotic vocals to create “world electronic dance music.” With influences such as George Michael and Madonna and a flair for Lady Gaga-like showmanship, Hayla is bringing her “Electro Diva Spectacular” tour around the country this summer as well as dropping her second album, WEDM 2012. International fame would be great, but Hayla’s more interested in changing people’s lives.

“My goals are to tour the world and expand the simple message I have to give — that your soul never dies,” she said. “We are here on a mission and I’m here to speak up for the gays! The world should be free from evil people, my goals are to help ten percent of the world! Then I will feel excited to leave it…. I want to earn money so I can share it with great people who need help. I want to give opportunity to people whom I believe are talented, the way people believed in me.”

Equality for the LGBT community is something Hayla is extremely passionate about, especially since she was raised by two lesbian mothers. And the LGBT community has embraced her right back becoming one of her chief supporters. The Advocate magazine even dubbed her as one of its “Reasons for Pride in 2012.”

“I am blessed to get into the gay’s hearts! They are the most beautiful and real people out there! They know who’s good and who’s not. They feel my heart and I appreciate that so much. Whoever does not respect the LGBT’s freedoms and rights will need to face me one day! I promise!”

Her empathy is ever-reaching. She wrote her billboard hit, “I’m Free” after she found her boyfriend of seven years in bed with another man. Instead of freaking out like most of us would have done, she embraced his coming out.

“I came from a gay family that was hiding it for years,” she explained. “I had a feeling that it was too good to be true because my life had so much freedom with this guy. We are still good friends and will always will be. He is a handsome man that liked beautiful girls but also beautiful boys… what’s wrong with that?”

Have a listen to Hayla’s infectious sounds. Do you want to get in on the “Electro Diva Spectacular” tour?