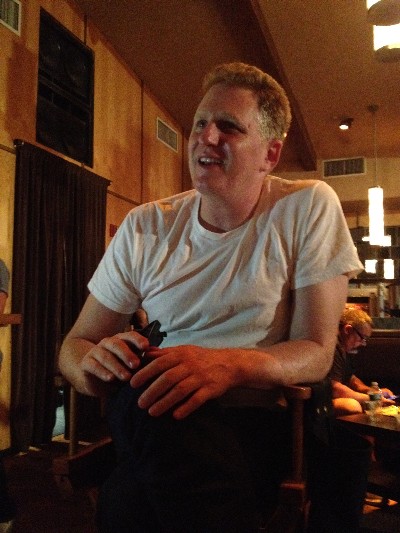 Michael Rapaport might play a married man desperately in need of guidance in his new movie, My Man Is a Loser, but the actor, who has worked alongside Hollywood heavyweights like Spike Lee and Robert De Niro during his 20-year career, is clearly still in control and still loving every bit of it.

CDL sat down with the star at the Marquee and grilled him on his current part. The character actor with the distinctive New York accent revealed the highlights of the film and what it was like snuggling with co-star John Stamos.

“I play Marty who’s at a point in his life where he’s married and sort of settled down and he’s trying to reinvigorate his life and reinvigorate his marriage,” Rapaport explained. “You know, I wouldn’t say it’s a midlife crisis, more like a midlife discovery. I really enjoy the character. He’s been a lot of fun to play. I think he’s very funny. He has his moments of losing control of himself in the film so I’m really enjoying it.”

Though Rapaport does say he tends to bring a little bit of himself into most of his roles, he could only laugh when asked if he could offer any marital advice to men going through his character’s problems. “Marriage is a touch business, you know what I mean? It’s a tough racket. I’m divorced so what do I know?” he joked. “I think marriage is like a job. It’s a work in progress. I don’t think there are any secrets to it. You have to put into it as much as you want to get out of it. Once you label marriage on a relationship the stakes are higher. I think the most important thing in any relationship, whether it’s a marriage or a girlfriend, even your friends, you have to maintain a certain amount of communication and level of respect for each other. If there was a manual on it somebody would be super rich. That’s why everyone writes books about it.”

Rapaport describes the movie as high energy, but contends that he’s most proud of the dialogue’s level of hilarity…. and spooning with Stamos. “Everyone wants to cuddle with Stamos, so that was fun,” he said. “I have been very proud of the sense of humor that has been presented in the film. I’ve really walked away from a lot of scenes just being proud and excited knowing there is a lot of humor. We’re midway through, but I feel excited about the level of language and the level of humor we are trying to articulate.”

New York native, Rapaport said he attached himself to the project because of the script and cast and because he’s played basketball with director, Mike Young for years. In addition, since the film is being shot in his home city, he said it was a “big incentive.”

Rapaport isn’t sure what his next movie will be, though he is planning on directing again. Whatever he decides, he says he won’t ever take his career or his fans for granted – however they want to remember him. “I’ve been fortunate to be working as an actor for 20 years,” he said. “I’ve had people come up to me and swear that the only thing I’ve done with my life is four episodes on Friends. For me, being recognized on the street where people want to say hello or shake your hand or give you high five or even a head nod, is something I’ll never take for granted – especially in New York, because in New York you get it the most because you are with the people and among the people. I’m proud when people say anything to me whether it’s about one episode on Friends or a Jay-Z video.”

For updates on My Man Is A Loser check out Step One Of Many Entertainment website HERE!