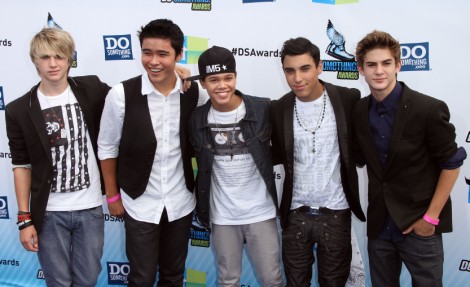 After two years, Perez Hilton is finally ready to reveal his brainchild boy band, IM5. Along with American Idol’s Simon Fuller and famed tour director, Jamie King, Perez toured the United States two years ago looking for youngsters to form a new, hot boy group. Celeb Dirty Laundry had the opportunity to speak to IM5 at the Do Something Awards in Santa Monica last weekend where the five entertainers radiated enthusiasm and excitement over their whirlwind schedule.

Cole Pendery, Dalton Rapattoni, Will Jay, Gabe Morales and Dana Vaughns are performing their new single, Can’t Stay Away, with Bella Thorne at the Universal CityWalk on Aug. 31. They’re also set to take the stage at Perez Hilton’s After Party for MTV’s Video Music Awards and are dropping the video for their latest single, Zero Gravity, next week. The fivesome told me to expect a lot of energy from the band that is not immune to how lucky it is to have such entertainment heavyweights in its corner.

“We think it’s great having Perez Hilton’s name behind us and the other two as well. It’s like having endless opportunity,” the band told me exclusively. “They have so many connections in the business: Perez Hilton, of course, has perezhilton.com; Simon fuller created American Idol and So You Think You Can Dance, and created the Spice Girls; and then Jamie King is the biggest tour director in the world. So we have those three behind us and anything’s possible.”

But don’t expect another run of the mill group. These guys pride themselves on their music IQ (they lectured me on the ever important cajon) as well their ability to actually play instruments.

Take a listen to IM5’s Can’t Stay Away below. What do you think? Can these guys give One Direction a run for their money?