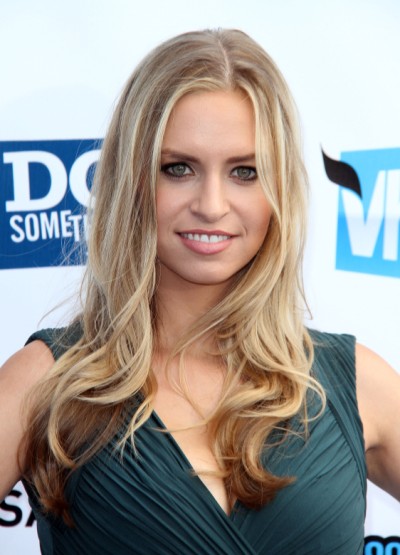 The Newsroom star Margaret Judson didn’t know much about acting before Aaron Sorkin picked her for his HBO show, but she did know something about journalism. The University of Illinois journalism grad began her broadcast career as a NBC page in NYC before landing a job as a research assistant for Keith Olbermann on Countdown. Sorkin ended up shadowing Judson while doing research for The Newsroom and hired her as a consultant, and eventually, as an actress playing Tess Westin.

“I’m really proud of what Aaron’s done,” she told Celeb Dirty Laundry in an exclusive interview. “I’m a woman he plucked out of nowhere to help as a consultant from NBC News in New York and he saw my potential and was really willing to work with me even though I wasn’t some big star.”

But she isn’t immune to the criticism. Sorkin has come under fire for the way he depicts his female characters who tend to spend a lot of air time tripping and mumbling their way through relationship issues in between the pertinent news stories of each episode. But Judson defends her writer and says those comments couldn’t be farther from the truth.

“I’m really proud of the women in our show. I’m aware of the criticism but I think Mackenzie [played by Emily Mortimer] is one of the strongest women characters I’ve seen on TV,” she said. “She’s calling the shots and telling everybody how things are going to be done. Some of the men maybe want to dip down for ratings but she’s keeping that standard and that bar really high. And then there’s Jane Fonda who is an incredible actor and I think an incredibly strong character. She is the one running the whole show. She’s calling every shot.”

Judson may be quick to defend but she’s not quick to spill. The will they/won’t they plot romance between Mortimer and Jeff Daniels’ characters, Mackenzie MacHale and Will McAvoy, continues to leave us viewers in suspense week after week. But Judson says she’s just as in the dark as we are. “It’s the first season. Who knows what can happen. We’re just laying the groundwork at this point so we’ll see what happens. I mean I’m rooting for them. I love them together but I kind of love them not together too.”

With the show renewed for a second season I’m sure Sorkin will drag the relationship out awhile longer. Do you watch The Newsroom? How do you feel about the way Sorkin has written his female characters? Are the criticisms valid?