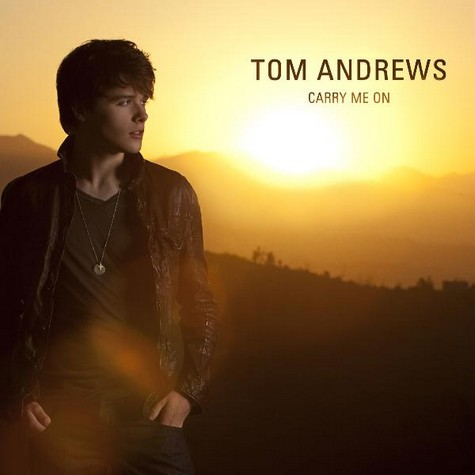 In 2010, Tom Andrews appeared on The Ellen DeGeneres Show. His rendition of “It’s A Man’s World” by James Brown sent shivers down the most hardened of spines and cemented him as a future music star. Tom was signed to Ellen DeGeneres’ famed Eleveneleven music label alongside Jessica Simpson, Greyson Chance and Savannah Robinson. His hit song Carry Me On garnered critical praise and blasted him into the stratosphere of the industry. Tom’s debut album will be released next year to the thunderous applause of 55 000 Twitter followers, 10 000 YouTube subscribers, and 28 000 Facebook likes. He is not only one of the best young musicians out there; he is also a gentleman, a kind soul, and a diamond in the rough land of music celebrity. Celeb Dirty Laundry had the honor to speak to Tom Andrews about what makes him tick. Get ready Tomahawks, because your boy is about to take over the world.

You had a career breakthrough when you appeared on the Ellen DeGeneres show in 2010. How did this happen? Walk us through it.

So, Ellen saw a video on my YouTube page, (TomAndrewsMusic) of me singing It’s A Man’s World, by James Brown, and then called me at about 11pm asking if I’d like to go on the show and make an album. And that’s what’s happing now I guess!

How is your working relationship with Ellen? Is it mostly professional?

I keep in contact with Ellen about what’s going on with my music. She’s really helpful and always positive, and a really great person… I’m glad she’s the boss. Haha.

What was the inspiration behind your hit song “Carry Me On”?

It’s just about needing a little help to get out of a hard time. When you’re not strong enough to do it on your own, having someone around who can help pick you back up.

Who, or what, was it written for?

It was written about a phone call in a car park. Very show biz. I know.

What type of sound will your upcoming album contain?

The easiest way to describe it is pop. I don’t think it’s too similar to what’s out there at the moment. It has loads of influences from all the types of music that I love to listen to. I wanted to make it something I’d buy if someone else released it, so it’s pretty big and fun.

Will the album take a different direction?

From Carry Me On? Yes. I co wrote Carry Me On with Greg Friel in Glasgow when I was 15. Most of the songs for this album have been written while I was 18. So the type of music I do has changed I guess.

Will there be covers, or only original work?

No covers. As far as I know!

Do you have a release date for your album?

Would you be able to share with us any songs you’re working on right now that we could look out for in the future?

Haha that would ruin the surprise! I play a few of the songs that’ll go on my album when I do gigs. But I haven’t got anything that I can send out yet.

You’re working with famed RedOne production team. What difference did they make to your music?

I’d wanted to work with the RedOne production team since I started doing music, so it was a dream for me to go to their studios. I don’t think it’s a major change from where the rest of the album has been going. More like another layer of pop goodness.

What do you draw inspiration from when writing new music?

Every song is loosely based on an episode of Eastenders (a long running television soap in the UK), or things that are happening in my life. Things that other people are going through that I’ve heard about. It varies, but I try to keep it based on something real.

What does the future of Tom Andrews look like?

A slightly older version of what I look like now.

If there’s one artist in the world you could collaborate with, who would it be, and why?

I’d love to sing with some of the awesome singers that are coming out of the UK right now. There are so many, I can’t chose one.

Are there any promotional/concert tours planned for 2013?

Nothing planned. But I’m told there will be!

You’re very well known on Twitter/YouTube/Facebook for interacting with your fans on a daily basis. Do you think it is important for well known entertainment artists such as yourself to interact with fans? Why? Most do not.

I do! I’m always so grateful to all of the people who’ve supported me over the last few years. And I love going onto things like Twitter to chat. I end up having massive long conversations that last for ages, which is fun.

If you could give aspiring musicians advice on how to make a breakthrough, what would it be?

Be creative, write songs and keep trying, I think are the things that have been working for me so far. When things don’t work out, and you have to go back to where you were a year ago, it’s so important to keep going. In my experience, that happens a lot!

How do you feel about reality television talent shows such as X-Factor UK/USA, Idol and/or The Voice?

I think they’re a brilliant platform for people trying to get into the music industry. I tried X Factor when I was 13, and entered BGT twice. I didn’t get anywhere in them, but for the few that do I think it’s a great opportunity.

What inspires you in life?

My parents and Teresa [Giudice] from The Real Housewives of New Jersey, to name a few.

Which song, in the history of music, has the most meaning to you?

Which album/musician/song is currently stuck on repeat on your Ipod?

At the moment, Adele, Ellie Goulding, Lana Del Rey, Maroon 5 and most of what’s in the charts.

And finally, all of your fans are wondering, are you single?

To Connect To Tom