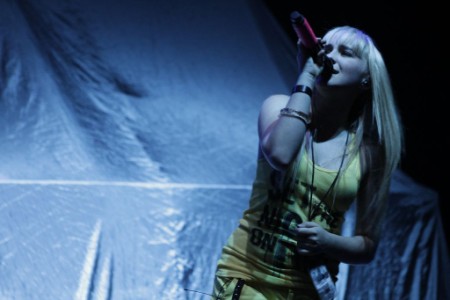 Pop singer, Camryn, may not be out of junior high just yet but she’s already opened for British boy band, One Direction, is in talks for a television show and has had two songs appear in a feature film. Not bad for being just shy of her thirteenth birthday.

Camryn’s just coming off an Asian tour and finished her 7-day stint with One Direction on Sunday. I managed to catch the singer back home in Denver where she’s trying to get her school work finished so she can start her summer vacation. “It was a really fun tour,” she said. “They [One Direction] were constantly running away from their security. But it was pretty tight. I didn’t get to hang out with them too much. There’s a huge age gap so that would have been a little weird. But they’re such goof balls and really fun.”

It’s been a whirlwind year for Camryn who has been on the road for most of it drumming up excitement for her music, including her newest single, Set The Night On Fire, which is currently being played across America.

Camryn hopes to join One Direction, and another one-named superstar called Beyonce, and become a multiple threat in the entertainment industry. Beyonce, in particular, is a source of inspiration. “I recently went to a Beyonce concert and she’s amazing. She can dance. She can sing. She’s amazing all around and I really want want to be doing that when I’m older.”

She may not have to wait that long. Camryn’s in talks with Peter Murrieta, executive producer of Selena Gomez’s launching vehicle, Wizards of Waverly Place, and says acting would be “super fun.”

But singing is her first love and right now Camryn is determined to make a name for herself in the business despite her age.

“I’m just trying to get my name out there a little bit more. I just want to do what I love to do best and that’s singing,” she said. “I really am all about strong females and I think my main message to everybody – guys, girls, whatever – is just to say no matter what age you are, no matter where you come from or what your circumstances are, you can do what you’ve been dreaming about and nothing is impossible.”

Check out Camryn’s new tune when you get the chance. Tell us what you think!