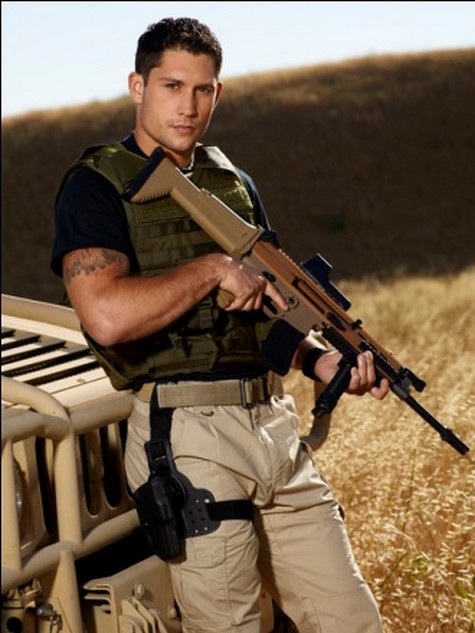 “Stars Earn Stripes” is new a NBC reality show that depicts America’s service members as athletes, warriors and caring service men. The show is action packed with military special Operatives teamed up with celebrities to complete an array of dangerous combat-derived tasks. The winners of this reality show are the veterans, as all the cash prizes are awarded to various veterans’ charities.

Talon Smith is one of the Operatives on the show and he spoke to CDL in an exclusive interview. He is currently a U.S. Navy Corpsman 1st Reconnaissance Bn, stationed in Camp Pendleton, having recently returned from deployment in Afghanistan and is a proud husband and father of a baby girl.

Talon shared with us some of his thoughts about the show, the military and his daughter.

Have you risked your life in the line of duty while in the Navy?

“Yes, I just got back from a combat deployment in Afghanistan, for the most part the deployment was quiet but there were two operations in which you know, needless to say, that I’m lucky to be back alive, that’s how I would put it”

How do you justify to yourself, putting your life at risk for the well-being of your nation?

“There is nothing to justify, it is what has to be done. Obviously after 9-11 you know our country was attacked and I would rather fight whoever wherever in the world besides ever having them come to our country again, so it really wasn’t justified, it had to be done so I did it.”

Does it bother you when the Government and the population do not provide adequate resources for the proper care of veterans?

“Definitely, you know we want to see the people who sacrificed so much for this country to be taken care of you know. I was fortunate to not come back wounded but there are a lot of veterans who come back and they are scarred, you see a lot of amputees  because of the enemies tactics and it is unfortunate, that at some point the aid stops and that’s not how it should be. If they are willing to sacrifice themselves and their bodies for this country, they should be supported. It doesn’t seem right to me.

I read that you are presently enrolled in college, what are you studying?

“I am going to an American military university right now, I’m doing general studies, I’ll be taking classes back up in September, depending on my schedule.  When I get out, it depends on what happens with my life, I am looking at a career in nursing but it all depends on what happens with this show, with the gym I will be opening up next year but I will be consistently in college at some point to get it done, I don’t know how quickly, but eventually.”

What would you say to today’s youth about joining the military?

“They should realize that it’s not just to look cool or some video game, when you join the military you are dedicating your entire life to your country and to service and you are going to do what you have to do to defend this country. For the people who go to infantry and special operations, be prepared when you come in, to exceed the standards and pass all the tests before you actually go to the specialized school. The last thing is to really make sure this is what you want to do. The worst thing you can do is make a commitment that you don’t want to be stuck in. Making a commitment to your country is one of the biggest things you can do outside of marriage. So don’t come in and think oh this isn’t what I want to do now and leave, you really can’t do that. Do it and put your whole heart in it and realize it’s not about you anymore, it’s about serving your country, the constitution and the people of this country.”

“It was an opportunity to give back for veterans charities. At first I was like, a reality show, because I did acting before I joined and was told to be weary of reality television. So of course I was skeptical, but they said it was for veterans’ charities and at that point I was in. It’s a good way to give back and bring awareness to my brothers who are still fighting overseas, to friends that are wounded and friends that I have lost in combat, so it’s just a way to honor them and it’s doing it in a way that’s never been done before. So I jumped at the opportunity so I could give something back, I was in, I had to be a part of it.”

Was there a celebrity in particular that you had hoped to partner up with?

Did you have a choice of who you could partner up with?

“We didn’t get a choice, it was a surprise, they kept it from us, or tried keeping it from us, I’m not going to confirm or deny if we did our job well and gathered some intelligence before and found out. We had no idea for sure until they actually told us and we were all ecstatic to be with these individuals was just an honour for all us Operatives”

Do you think there are some celebrities with disadvantages or advantages on the show?

“Everybody has strengths and weaknesses; it’s just how they use them. I really wouldn’t say anyone had an advantage, I think everyone is going to be surprised to see people who they think are the hard chargers you know have a little trouble. The right mindset and having heart were the two biggest attributes and all the celebrities had that when they came on the show. It was a really a fair competition in my opinion.”

What was the most important skill you planned to use to get through the missions on the show?

“Teamwork is number one, you have to do this as a team, it’s not individuals out there. Now as far as for the skill that I was able to teach the celebrity was basically marksmanship, there is a lot of shooting on the show, more than I thought originally, so teamwork, basic marksmanship and you can’t teach somebody how to have heart and perseverance, they brought that themselves, they proved that and it was a good time.”

Do you see this show as a challenge, does it compare to what you actually do in the navy?

“The show missions, a few of them were definitely some good ones that had me huffing and puffing, I wasn’t ready for that.  I work out a lot and it’s actually a huge routine in my life, so when I was slightly winded, I was suprised. Compared to real life, they had some similar situations that I have been faced with. Portions of challenges that I have  done in real life and in training, the live fire was all real, that’s an aspect of it. Some of the missions, the first mission coming up, I’ve actually done training just like that, minus a few things here and there. They did well.”

Do you have a favourite quote or motto that inspires you?

“I have a lot of those actually, one of them is a tattoo on my arm, and it says “this too shall pass” because no matter how things get bad you just got to stay strong and keep pushing through

Have you heard about the controversy about Jack Osbourne who was let go from the cast of Stars Earn Stripes two days before filming?

“I just read about that recently”, no further comment.

In your personal life, you were expecting the birth of your first child during the show?

“Yes, we actually just had her; we had our little girl on June 27th. She’s been a blessing, she’s healthy, she likes to eat, sleep and cuddle; she’s a lover!”

Talon left us very excited to watch the show and I can tell you that we were not disappointed. Talon’s partner is Laila Ali and when he told us that his partner was a “champion”, we should have known. Laila is a world-class athlete, fitness and wellness expert and the charity she and Talon are playing for is “Military Child Education Coalition”.

Talon and Laila were the first team to take on the mission in the premiere episode and they managed to complete it in 13.20 minutes. Although Talon and Laila did not complete the mission in the shortest amount of time, they lacked the advantage that the other teams had, which was watching them go first. We have no doubt that these two will do even better in the weeks ahead – when they are given the same advantage.

The best part of the first episode for us was when Talon showed viewers what a great sense of humour he has. He went to knock down a door using only his head and said “I got this”, tried to knock it down and failed, then laughed at himself and said “I don’t got this”, hilarious!

Stars Earn Stripes is raising awareness and money for well deserved charities, it’s a refreshing reality TV show with a strong blend of team work, tough determination, lots of sweat and humour; you don’t want to miss it!