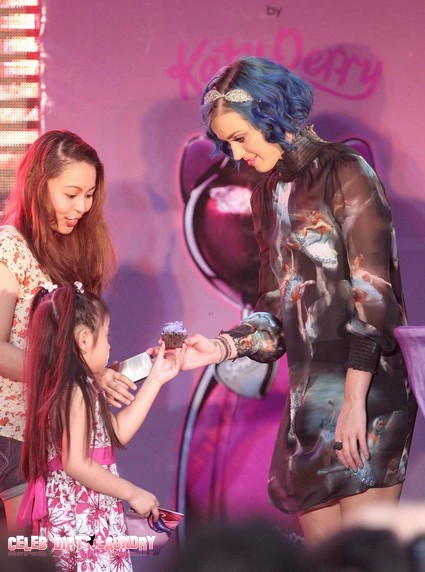 Katy Perry, 27, looks happy with her Smurf blue hair as she meets and greets her fans in Manilla, Philippines.  The event was a meet and greet and a signing and launch for her fragrance PURR.  Katy is expected to stay at ‘The Peninsula Makati’ while she is in Manilla.

Katy will be performing tonight at the SM Mall of Asia Concert Grounds as part of her California Dreams concert tour.   Katy tweeted about the concert, “I am so excited to PEACOCK in front of 25,000 Filipinos tonight singing every word, lil girls dreams do come true!”

This is Katy’s first public appearance since her husband Russell Brand blindsided her by filing for divorce.   Yesterday Katy unfollowed Russell  on Twitter, making their split official.

Katy’s “California Dreams” Tour has already broken records as one of the top 50 tours in the world, and has even won an MTV EMA award for Best Live Act. It also earned her a nomination as Favorite Tour Headliner in the People’s Choice Awards 2012.

The exclusive photos are courtesy of a very special friend of Celeb Dirty Laundry who lives in the Philippines!  Click on the thumbnails below to enlarge!