CDL Exclusive: Rachel Weisz In Manila On The Set Of ‘The Bourne Legacy’ (Photos) 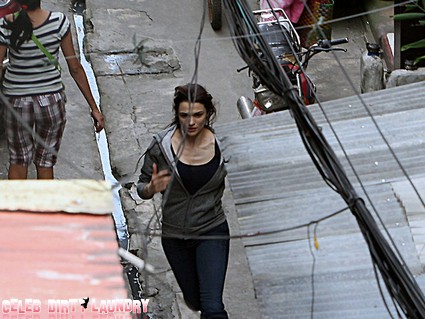 The Bourne Legacy is the 4th Bourne movie and we have some exclusive pictures from the set of the movie in Manila.  The movies are based on the novels by Robert Ludlum.  The Bourne films are a series of action thriller spy films based on the character Jason Bourne, a former CIA assassin suffering from extreme memory loss.

Screenwriter and director Tony Gilroy chose Manila as location for The Bourne Legacy.  Gilroy said that 40% of the film will be shot in Manila.

It has been confirmed that the shooting locations are to be Ayala Avenue, Intramuros, Jones Bridge, Marikina City Market, Navotas Fishport, and Pasay Taft Rotonda in Metro Manila, as well as Palawan Philippines.

In the pictures above and below ‘The Bourne Legacy’ star Rachel Weisz performs her role on the first day of the action thriller’s production in San Andres, Manila.

The reason the “Bourne Legacy” team included the Philippines in the movie, was “They felt very welcome, and they see the pedigree or history of films made in the Philippines. More importantly, it’s the Filipino’s attitude of welcoming the visitors.”

The exclusive photos are courtesy of a very special friend of Celeb Dirty Laundry who lives in the Philippines!