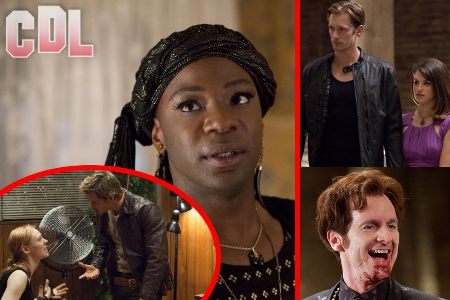 If you’re a Truebie, then I’m going to assume you watched last night’s episode of True Blood entitled “Everybody Wants to Rule the World.” It was definitely a blood pumping, blood letting episode and, in the end, raised a whole a lot of drama. Like, for example, vampires-wanna-take-over-the-world-forever kind of drama and holy-crap-Sookie-might-be-running-out-of-her-fairy-juice drama. I definitely want to hear about the bloody drama that got you excited but in the meantime let’s take a look at CDL’s Top 5 Hilarious moments from last night’s episode. Disclaimer: If spoilers make you physically ill, DO NOT read any further.

1. Genius Jason Stackhouse has another one of his brilliant-country-bumpkin epiphanies. While in the police station, Jason and Andy try to figure out who’s behind the hate group known as “The Obamas,” who are aptly named because they wear Halloween masks with Obama’s face on them. They stumble across a website titled Keep America Human. The group’s manifesto says, “Brave citizens like [them] need to rise up [against the supes] and fight back,” which Sheriff Andy reads aloud. “If they’re so brave why wear the Obama masks?” says Deputy Kenya Jones. As Jason is looking through the evidence box filled with masks, he brilliantly adds, “M-m-maybe it’s ’cause they don’t want to get recognized!”

2. Lafayette continues to come into his mediumship powers and adds some good ol’ Southern fabulosity to his ghostly encounters. Lafayette agrees to help Sookie and, while he fails to contact the vampire spirit that psychically connected with her in the past week’s episode, he get’s barraged with an onslaught of spirit voices. “Y’all need to simmer the **** down,” he says. “I can only listen to one y’all at the same goddamn time!” In the flurry of spirit voices, he manages to make contact with Gran, Sookie’s long deceased grandmother, who imparts some advice that might help Sookie come to understand the true nature of her parents’ death. “The rest y’all . . . I ain’t G-Mail for dead bitches. Aw, hell. Send your own goddamn messages.”

Lafayette also tells Sookie that her Gran is glad the “striptease fairies” are looking out for her. Speaking of fairies . . . .

4. When shapeshifters literally become flies on the wall. Sam and Luna (his girlfriend who miraculously survived a stint with skinwalking) shift into flies so they can spy on Sheriff Andy and Jason’s conversations in the police station.

5. It’s funny when . . . you think you’re about to escape the Authority and then your best friend — WHO REALLY BELIEVE HE’S THE CHOSEN ONE (like Harry Potter) —  turns on you. I was not surprised when Bill betrayed Eric, who just wanted to skip out of the Authority with all his friends linked happily together at the elbows. I hope that Bill is just up to another one of his devious schemes and is secretly plotting against Salome and her crazytown-delusional-beliefs. But . . . maybe Bill really has gone off the deep end.

6. I know I said TOP 5, but I had to do 6 this week. Brownie points for this episode definitely go to Pam. She’s one of my favorite characters on the show. Her dry wit, humor, and relentless sarcasm is so refreshing. Now that she’s a creator (having turned Tara into a vampire) we’re starting to see her character develop more and more as she slowly begins to acquire this “motherly” instinct. It’s subtle and barely noticeable, but it’s there.

Let us know what your top funny moments were in the comments section below! Don’t forget to check back with us next week for another LIVE recap and more True Blood coverage. Fangks for watching/reading with us.