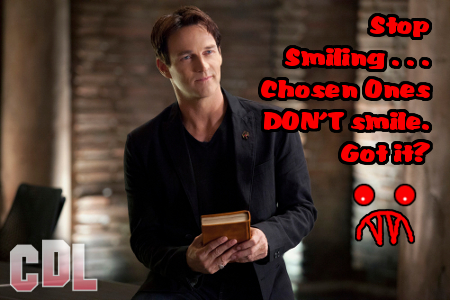 Everyone here at CDL pretty much loves sinking their fangs into new episodes of True Blood, and last night wasn’t any different. Last night’s episode, which was titled “Gone, Gone, Gone,” was filled with so many great moments that we had a hard time picking out just five; however, we persevered and did our best to boil it down to only the most hilarious, most heart warming and, of course, the bloodiest. Gotta love True Blood and their vampire juice explosions! If you were out-of-your-mind crazy last night and missed the episode, don’t forget to check out our full, live, scene-by-scene recap. Click here to get all the bloody details.

Fave Moment #1: That moment when we realized that Sookie Stackhouse can’t even enjoy her dinner without almost becoming someone’s dinner. Sookie’s blood is like a strawberry Jamba Juice for vampires and they always want to eat her. I thought the opening scene where Sookie gets a mysterious visit by the coroner was a great way to start the episode. The coroner, who happens to be a vampire, attacks her, but . . . don’t worry. As always, it’s no big deal — because sookie is a bad ass fairy who can just stab him in the heart with chopsticks!

Fave Moment #2: When Hoyt makes a life changing decision to forget about his Bon Temps life and move to . . . ALASKA? So apparently whiny-baby Hoyt wants to move to Alaska now . . . so . . . there’s that. He met with Jessica and Jason at Merlotte’s to break the news. Hoyt wanted to get rid of his “hurt” and asked Jessica to glamor him so he could forget everything. Jessica agreed to do this for him. I’m sure many, many people shed a tear during this moment, especially when Jason stops Hoyt in his truck on the way out of town. Hoyt doesn’t remember Jason at all, which prompts Jason to completely breakdown into a teary eyed mess.

Fave Moment #3: Bill continues to think he’s been chosen by Lilith to rule the world — or some crap like that. I really hope Bill is just playing some sort of absurd angle with this whole Lilith situation because I really can’t take him seriously if he’s not. I can usually tell when characters are being devious for the greater good, but Bill is such a stoic character that he’s hard to read — perhaps we should thank Stephen Moyer’s wonderful acting abilities for Bill’s complex character (seriously, I’m not being sarcastic there). Doesn’t Bill know that there’s only one chosen person in this world? HARRY POTTER!

Fave Moment #4: Tara completely chops off the head of the new Area 5 Sheriff and frees Fangtasia from all that tyranny! Yay, Tara! I loved the moment when Tara, being the strong and adamant woman that she is, took matters into her own hands and killed Elijah (no, I’m not getting confused with Vampire Diaries). She just happened to find a sword in Fangtasia to use as her weapon of choice. What is it with all these amazingly convenient weapons? First chopsticks, now swords? I’m just waiting for someone to be killed with a magical fairy lightsaber — stay tuned for next week’s episode.

Fave Moments #5: When you stumble across a magical fairy contract what do you do first? A) Go to the local university to see if a human professor can interpret the document? or B) Do the logical thing and see if there’s a 500-year-old pregnant fairy at the scandalous yet groovy fairy strip club to read it for you? If you guessed A, then you guessed correctly. That’s exactly what Jason and Sookie did last night when they found a magical document hiding beneath a bedroom floorboard. I guess, to be fair, Sookie or Jason didn’t know (but does Jason really know anything?) it was a fairy document until they visited a professor at a local university. When he told them that he couldn’t read it, that it didn’t seem like any human language, the fairy light bulbs went off in Sookie’s half-fae brain and she got her act together to visit Claude and his sisters at the fairy club. Luckily, there was an ancient fairy there that could read it. She said that it was a magical contract (OF COURSE IT IS!) that, basically, seals Sookie’s fate away as being dinner for Warlow — the baddie that ate Sookie and Jason’s parents. #SadnessAlways

Check out CDL’s top five favorite moments in the video below!

Other moments we loved: When Jessica said her guards were starting to look “mighty tasty,” thus her reasoning for sending them all home; when Rev. Newlin and Russell are dancing all over those bodies; Steve Newlin’s reaction to Emma’s transformation (back into a human); and Sam and Luna’s stealthy shapeshift-sational infiltration of the Vampire Authority HQ.

What were your favorite moments on last night’s episode? Please subscribe to our YouTube channel so you get all our updates. Lots of fun things are going to be happening there, and we want you to help make it even more fun! Don’t forget to tune in next week for more bloody awesome moments and fangtastic recaps. I have to go now because I can’t think of any more True Blood puns . . . .