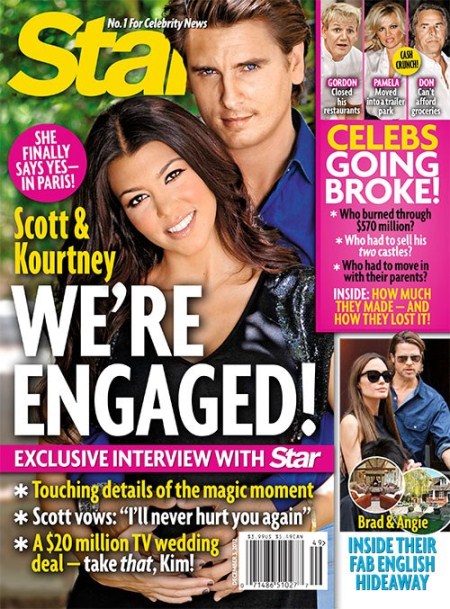 On the cover of the latest Star magazine, there’s an in-depth report on celebrities going broke. Now, you’re most probably asking yourself, “How can a celebrity go broke if they have millions?” Well, let us assure you dear reader, the more money you have, the easier you’ll go broke. It happens to celebrities every day. They spend their hard earned cash on luxuries, but fail to pay taxes. They swipe their black Amex at an upscale boutique, but forget to lower the limit on the card. They draw money from the ATM, but soon realize that their greedy manager spent it all on “tour stuff”. It’s not a strange occurrence, nor is it an abnormal occurrence, especially in the hard economic times of today.

Several celebrities feature in Star magazine’s stars-gone-broke report, including Gordon Ramsey – the celebrated Michelin star chef who had to close one of his restaurants in Cape Town, South Africa recently due to bankruptcy. Pamela Anderson – the big boob Baywatch star who hasn’t had a proper film or television role in years. And finally, Don Johnson – the ex-Miami Vice star who lived it up during the 90’s. One of these celebs burned through $570 million, another one had to sell his/her two castles, and another one had to move in with his/her parents.

Hey, it happens! Several other stars have also experienced this financial backlash of fame, most notably 80’s television stars and overrated one hit wonders in the music industry. Take Toni Braxton for instance. The Unbreak My Heart singer had to file for bankruptcy, but attempted to save about $50 000 from creditors. She was caught out and is currently forced to pay back that money, even though she doesn’t have a cent left in her bank account. Take Simon Cowell. The music mogul from hell wouldn’t be who he is today if it weren’t for bankruptcy in early years.

However, celebrities have been keeping a close watch on their finances in recent years, especially after the recession hit and the economy stagnated like a backwater town without a source of fresh liquid. They might be immune on the big screen and on the radio, but they’re definitely not immune from the trouble and toils us regular folk have to contend with on a daily basis. Being a celebrity might sound like a glorious experience, but in actual fact, being a celebrity is, in reality, a war-torn existence with battles and demons in glorified form.