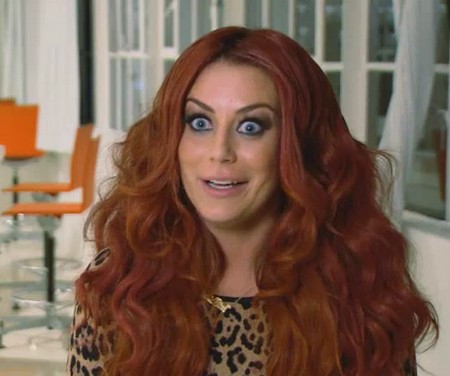 In this week’s episode it’s time for someone new to get nasty, Teresa Giudice and she declares that she has had enough of a certain someone’s ‘dirty’ mouth.  Cat fight ALERT! Now, don’t think Arsenio Hall is going to be spared when Teresa comes out ‘guns blazing’ in the board room, because Arsenio puts it all on the table and says, “don’t throw me under the buss, because I will back it up and hit you with it.”

This week’s task has the contestants producing a four page print ad for “CHI Touch” Digital Touchscreen Hair Dryer. We all know that Aubrey O’day loves attention and this week, she gets a whole lot of compliments, from herself! Aubrey decides to use herself as the model in the print ad because as she says it, she has “fierce hair.” (I swear that girl’s ego makes me vomit in my mouth) I hate to break it to Aubrey, but rumour has it she leaves the show before Teresa, lol.

When ‘trouble in paradise’ ensues, Trump gets some help from former winner John Rich and runner-up Marlee Matlin who can’t help but throw in their two cents.

Now, here is a huge spoiler, so don’t read any more if you don’t want to be spoiled! Apparently, the final two are going to be Clay Aiken and Arsenio Hall! Personally, I can’t wait for the two bitches, Aubrey and Lisa to get fired! I might even open a bottle of champagne to celebrate.

It’s certainly down to the wire with every celebrity for themselves and their charity. Check out the two videos below, one is a peek at tomorrow night’s episode and the other is Trump defending his firing Dayana, maybe he’s feeling guilty that he didn’t fire self-proclaimed bitch Lisa Lampanelli, we all know she deserved it.