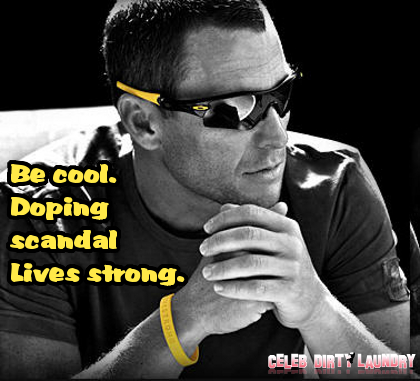 Lance Armstrong is facing new drug charges and he is denying them all the way. The famous Tour De France cyclist and celebrity spokesperson has been an inspiration all over the world to people suffering from testicular cancer. His highly publicized battle with testicular cancer inspired the yellow “Livestrong” wrist bands from his charity with the same name.

A letter was sent to Armstrong this week from the U.S. Anti-Doping Agency and threatened to strip him of his seven (yes, you read it, SEVEN!) Tour De France titles. The 15-page document was obtained by The Washington Post in which it states that Armstrong tested positive in 2009 and 2010 for “blood manipulation including EPO use and/or blood transfusions.” These recent charges also ban Armstrong from partaking in triathlon competitions, a sport he started enjoying after his cycling days.

Celebrities love releasing their “official” statements through their reps and Lance Armstrong released one stating, “I have never doped, and, unlike many of my accusers, I have competed as an endurance athlete for 25 years with no spike in performance, passed more than 500 drug tests and never failed one. That USADA ignores this fundamental distinction and charges me instead of the admitted dopers [and it] says far more about USADA, its lack of fairness and this vendetta than it does about my guilt or innocence. Any fair consideration of these allegations has and will continue to vindicate me.”

The letter reveals ten other cyclists and former doctors of who were completely aware of the doping scandals in the professional cycling arena. This would not only be a devastating crush for the entire celeb/sport industry, but would also place Armstrong under a new light, that of a cheater and a liar.

What do you think? Did Armstrong dope his way to 7 titles? Tell us what you think about this latest scandal in the comments below.