Channing Tatum Strips Down and Comes Out For New Movie 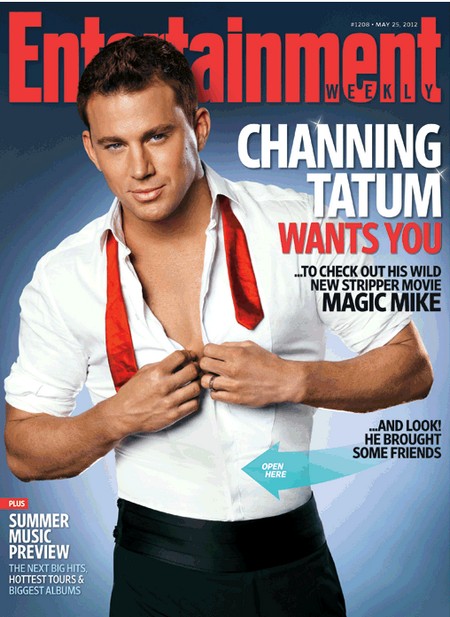 From stripper to star to Soderbergh collaborator, Channing Tatum is proving he’s more than just a piece of meat – though he is playing one in his new movie.

Tatum is promoting his new stripper flick, Magic Mike,which was based loosely on his time dancing for money in Miami when he was 19.

“It’s risky,” concedes Tatum. “People say that women and the gay community will go see it — knock on wood — but I know straight guys won’t be like, ‘Yo, what’s up man — you wanna go see the stripping movie after the game tonight?’ I doubt they’ll have the balls to see it. What’s funny is that the girls don’t ask me questions about my stripping days, but straight guys want to know everything. It’s that fantasy element. It’s probably why a lot of females on Halloween are the whorey version of a ketchup bottle, or slutty nurse, which I love and respect — it’s liberating.”

It’s this uncanny awareness and down to earth humor that’s propelling Tatum into superstardom. With money makers like The Vow and 21 Jump Street under his belt, Tatum is expected to only strengthen his star power this summer with Magic Mike and the G.I. Joe sequel.

It’s a versatile mix for the star who admits his main objective is to grow as an actor. Tatum may be hunky and perfectly built but he’s a self-taught student of cinema and joked he auditioned for the Josh Brolin part in No Country for Old Men even though he knew he was way too young for the role because he wanted to be in the same room as the Coen brothers and, maybe, pick up some tips.

“I’ve been acting for eight years now, and I feel I’m just starting to understand things,” he says. “As soon as you think you’re the shit, you’ll find 100 people that will point at you and laugh. I don’t ever want to be that person — I want to keep finding people I can learn from. That’s my entire journey in life.”

I can’t contain the giddy school girl smile on my face. Don’t you just want to hug him? He seems like such a good, all-around guy. Let’s face it. Acting doesn’t come easy for Channing. Daniel Day Lewis he isn’t. But he works hard at it. He studies what Justin Bieber likes to call, “the business”. And he understands he had to pay his dues. He even mentions his movie, Dear John, and you know he thinks it sucked (which it did) but he doesn’t say it. He’s proud of having had the experience. “It was not a perfect movie, but I loved it because it was a labor of love, every single part of it,” he says. “You go through every single variation of the script, and you work on it with the director and the actress, and then you decide whether you can make it better with reshoots. I wish more actors would do it, because I think it would give more connection to what they’re doing and why they’re doing it.”

See what I mean? Grateful, intelligent and smart. Believe me, I wasn’t always on the Channing Tatum train. I saw She’s the Man and seriously wondered if he could breath with his mouth closed but that was a stepping stone. As part of a generation that sadly wants everything – including money and fame – right away without having to work too hard or sacrifice too much, I think Channing is giving us all a lesson in humility and hard work. What do you think? Do I need to settle down with my crush or is it totally understandable?